Following up on a subject I have covered for a number of years, two days ago marked three years since a tribunal found that China's claim of historic rights in the South China Sea was unlawful. And willing to push back stronger than the Philippines four heavily armed Vietnamese coastguards have been involved in a week-long confrontation with Chinese vessels.

To be clear some of China’s maritime disputes span centuries and started with the Champa Sea or Sea of Cham a maritime kingdom that flourished before the sixteenth century.

From around the 6th to the 15th centuries, the South China Sea in fact was known by navigators throughout Asia as the Champa Seaits various kingdoms, presided over by regional royal families, also included sizable portions of eastern Cambodia and Laos.

The oldest artifacts of a distinctly Cham civilization—brick flooring, sandstone pillars, and pottery found at Tra Kieu in Quang Nam Province—date to the second century A.D.

The Champa empire was the chief rival of the Khmer Empire, in Cambodia, and Dai Viet, an early Vietnamese kingdom to the north. Champa's conflicts with Dai Viet seem to have started at the end of the tenth century, as the Vietnamese pushed south to the Cham kingdom of Vijaya (today's Quy Nhon).

Bas reliefs in a temple at Angkor depict an epic naval battle between the Khmer and Champa in the 12th century. The Cham navy was unrivaled, but on land the Cham suffered many costly defeats.

Territorial wrangling continued until 1471, when Vijaya was finally captured, and by the mid-1600s the Champa empire had been reduced to its southern kingdom of Panduranga (now Ninh Thuan and Binh Thuan Provinces, where most of Vietnam's Cham descendants live today). By then, a Cham diaspora had spread to Cambodia, Hainan, the Philippines and Malaysia.

In 1832, Emperor Minh Mang set out to crush the last vestiges of Cham autonomy and stamp out the culture, burning Cham villages and farmland and destroying ancient temples. Many Cham fled to Cambodia, where their descendants number in the hundreds of thousands today.

Whereby the by me reported on violent demonstrations protests in China against Japan in 2012 can be traced to the Sino-Japanese War of 1894, while Japan’s defeat in World War II and Cold War geopolitics added complexity to claims over the Diaoyu/Senkakus islands. The fight over overlapping exclusive economic zones in the South China Sea has an equally complex chronology of events steeped in the turmoil of Southeast Asian history.

But the key finding in the South China Sea arbitral award concerned “historic rights” held by China over ocean space within the nine-dash line. The tribunal found not only that any “historic rights” China possessed over ocean space were extinguished by the UN Convention on the Law of the Sea (UNCLOS) to the extent of incompatibility, but that there was no historical evidence that China ever exercised such rights of an exclusive sovereign nature.

Nevertheless, in recent years, China has undertaken drastic efforts to dredge and reclaim thousands of square feet in the South China Sea. It has deployed anti-ship and anti-aircraft missile systems on the Spratly Islands, according to the U.S. Department of Defense, and constructed military infrastructure on several artificial islands, such as runways, support buildings, loading piers, and communications facilities. China’s land development has profound security implications. The potential to deploy aircraft, missiles, and missile defense systems to any of its constructed islands vastly boosts China’s ability to project power, extending its operational range south and east by as much as 1,000 kilometers (620 miles). 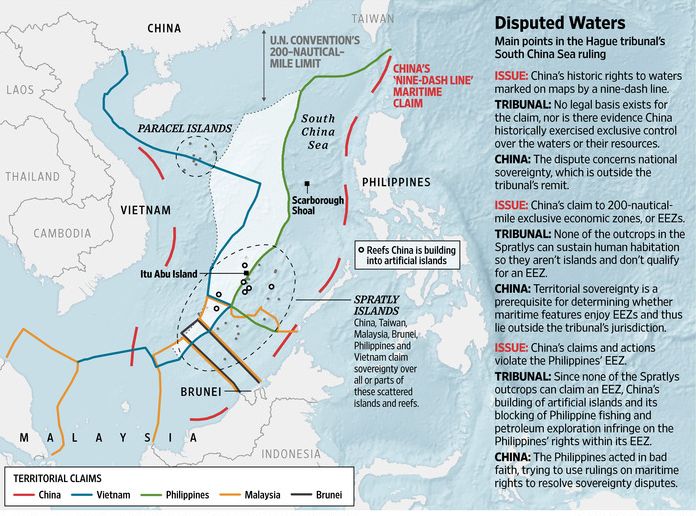 China’s highest rate of island development activity is taking place on the Paracel and Spratly Island chains. Beijing has reclaimed more than 3,200 acres according to a U.S. Defense Department report.

Subi Reef and underneath the Fiery Cross Reef are increasing its potential power projection capabilities in the region. 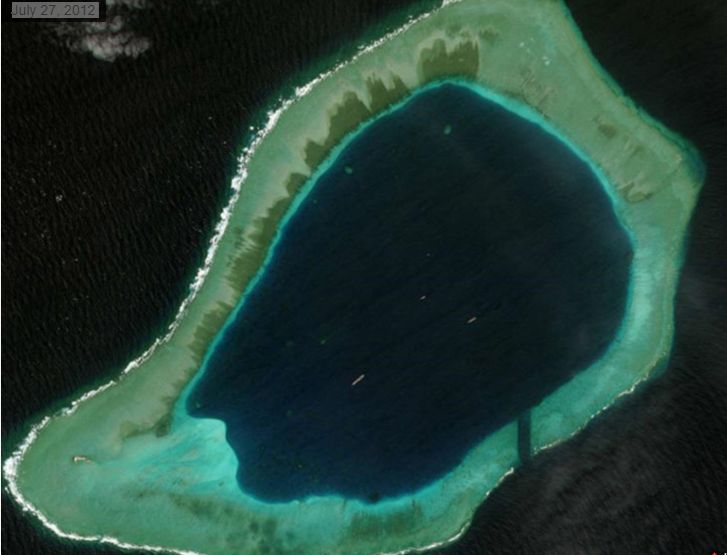 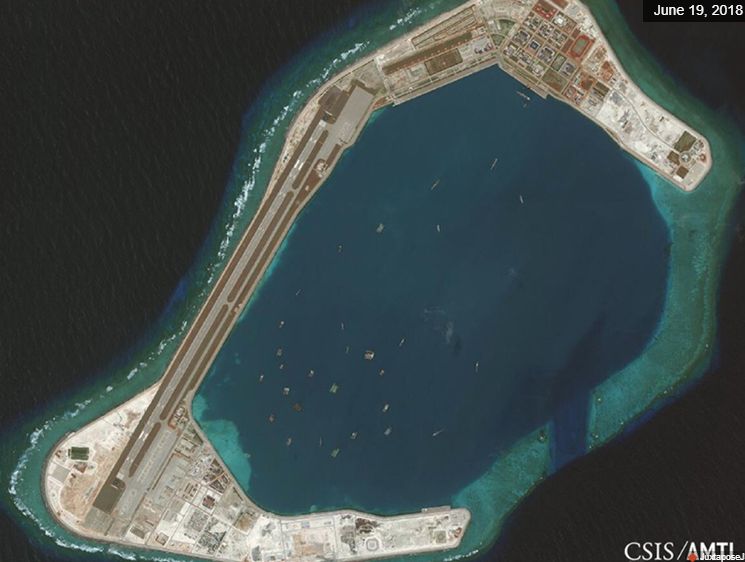 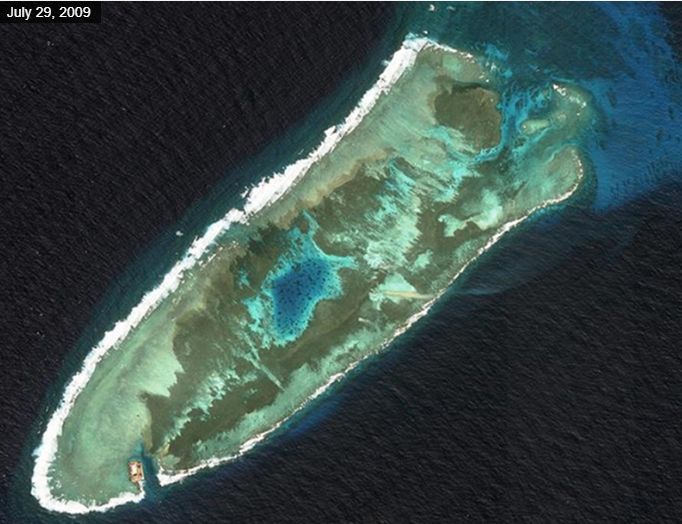 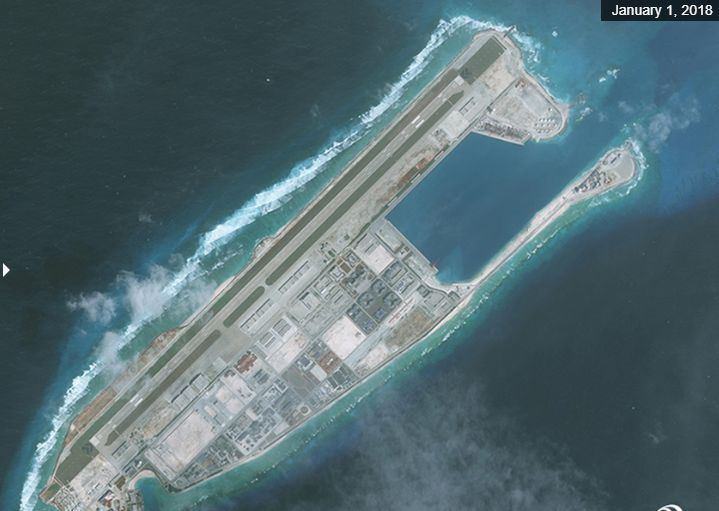 Thousands of vessels, from fishing boats to coastal patrols and naval ships, ply the East and South China Sea waters. Increased use of the contested waters by China and its neighbors heighten the risk that miscalculations by sea captains or political leaders could trigger an armed conflict, thus crisis management will be crucial. 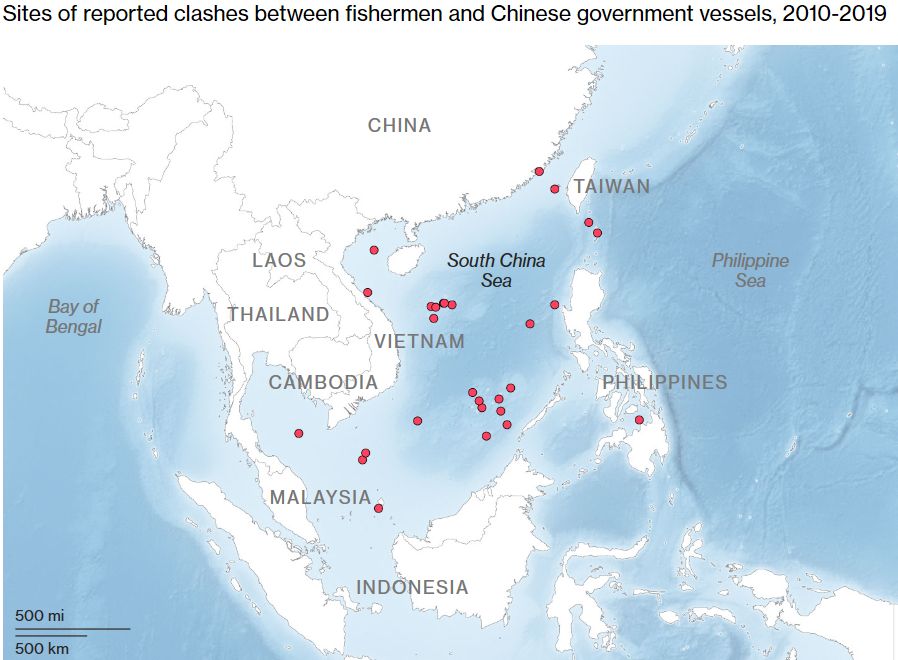 Contentious activity in the South China Sea will also grow as the U.S. Navy increasingly challenges China's coast guard and maritime militias and vice versa. Separately, unrest in Hong Kong over an extradition law could provide an opportunity for the United States to exert targeted trade or sanctions pressure.

Thus in the near future, tension will continue in the South China Sea, unless a significant change takes place in the factors that render China reluctant to initiate reassurance.