In a major move that rattled the White House today European countries trigger a dispute mechanism their nuclear deal with Iran. Thus they are not joining a campaign to implement maximum pressure against Iran. They also start a clock that the Europeans may not be able to control.

What to Watch for

Germany, France and the UK issued a joint statement announcing the move, saying that they were "left with no choice" but to trigger the dispute mechanism. But the move could prompt the return of U.N. sanctions...However, the three European powers noted that the decision does not mean they are joining in US President Donald Trump's "maximum pressure" campaign against Iran — leaving a door open for diplomacy. 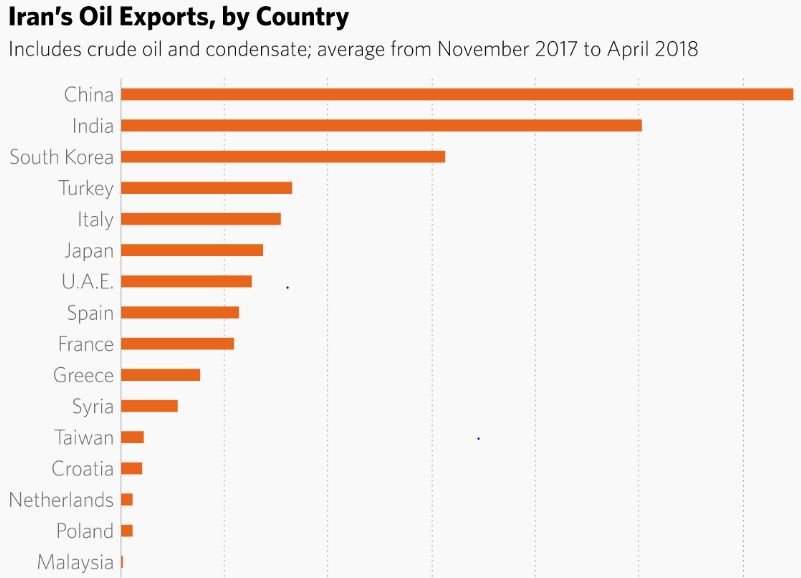 What the timing concerns it came shortly after Iran admitted that it accidentally shot down a Ukrainian passenger jet. The intense international pressure once again reflects a simple reality for Iran: It is a country that maintains deep connections to the international world. Iran's leaders may want to control the flow of information and citizens (they certainly calculated — correctly — that the security apparatus could contain the inevitable street protests over the government's admission of culpability), but they can scarcely ignore the fact that many Iranians are accustomed to traveling abroad and that the country's economy is deeply dependent on foreign trade and energy exports. Because of Iran's strategic imperative to improve its economy, blunt the impact of sanctions and eventually negotiate with the United States, the Islamic republic had little choice but to come clean over an incident that killed so many foreigners — and fellow Iranians. 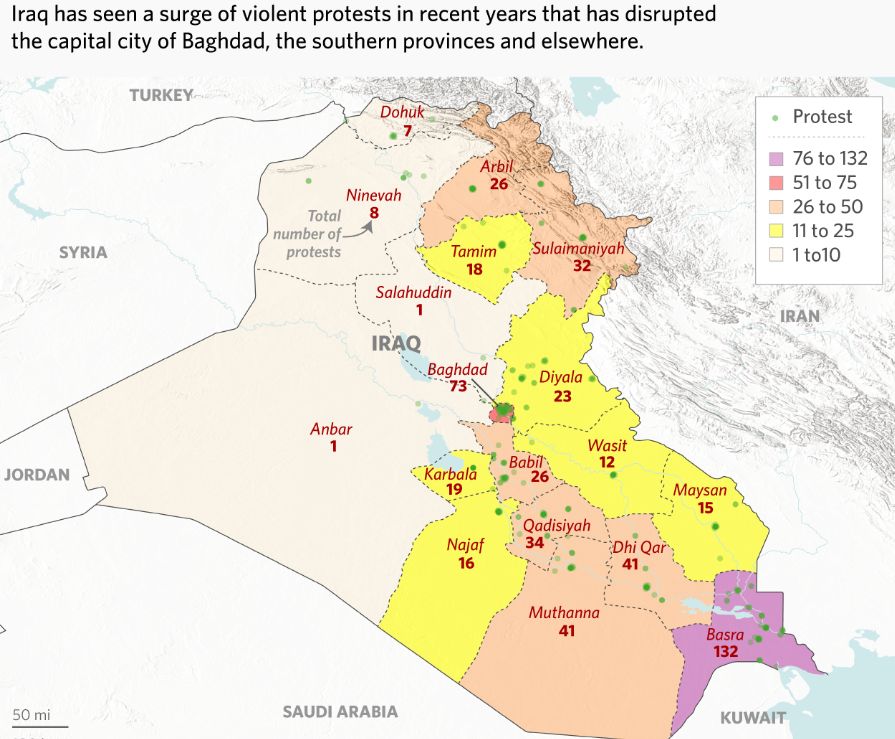 Hope to Drag Out the Process

Despite increased pressure from the United States, the E3 said they were "not joining a campaign to implement maximum pressure against Iran," and that their intent was to "preserve" the Iran nuclear deal. While it is unrealistic for Iran or the United States to rejoin the agreement both have now abandoned, the Europeans don't want to see the two years of diplomatic negotiations leading to the deal go for naught and think the JCPOA should be used as the starting point toward a new agreement. Right now, the Trump administration is not even considering that option.

Triggering the dispute resolution mechanism starts a process that could bring back U.N. Security Council sanctions on Iran within two months. But an accelerated settlement does not appear to be the E3's intent. As long as all the parties agree, most of the steps in the dispute resolution process can be extended for an indefinite period. The Europeans will likely try to drag out the process as long as possible and use it as leverage to force Iran into new negotiations. They probably recognize that Iran is unlikely to go back into full compliance with the deal itself, barring a major reversal in U.S. sanctions policy. So, they will hope that by initiating the process that could "snap back" U.N. and EU sanctions on Iran, they can deter Tehran from taking more aggressive actions with its nuclear program.

What to Watch for

Iran's next moves will be important. The new year already has brought the biggest crisis between Iran and the United States in decades and one that easily could have resulted in the United States striking targets inside Iran. With President Donald Trump insisting that Iran will never acquire a nuclear weapon on his watch, a U.S. military response to further escalation on the nuclear front by Tehran is possible. This possibility, coupled with the European position, could prompt Iran to slow the pace at which it is willing to resume aspects of its nuclear program, though Iran is likely to continue some degree of nuclear escalation.

The next moves by the United States also will be critical. The Trump administration will push France, Germany and the United Kingdom to go quickly through the dispute settlement process, but currently, the U.S. position is that it is no longer a party to the nuclear deal. But if the Europeans seek extensions and allow the dispute process to slow, the Trump administration could argue that it is a party to the JCPOA and go straight to the U.N. Security Council to argue that Iran is in noncompliance with its commitments. The Security Council resolution regarding the nuclear deal does not require JCPOA members to use the accord's dispute resolution process in order to determine noncompliance. And if the United States makes that determination then U.N. sanctions snap back on Iran unless the Security Council — subject to a U.S. veto — passes a resolution to extend sanctions relief for Iran. Russia and China could, however, reject the U.S. ability to trigger such sanctions, and not recognize them. 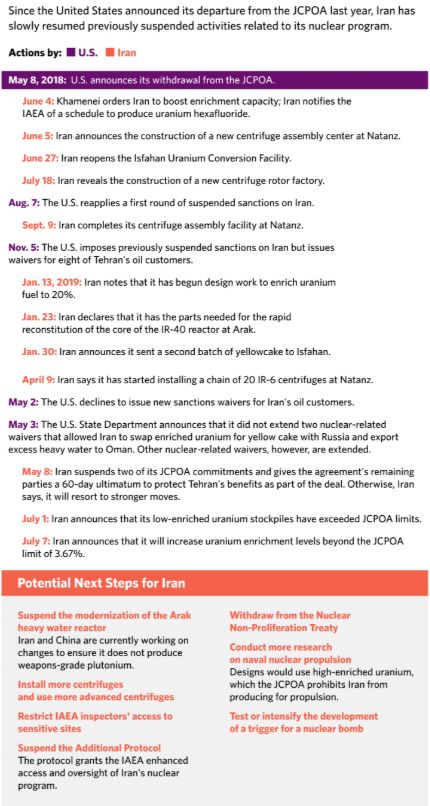 The closer we get to October, when the U.N. arms embargo on Iran expires under the JCPOA, the more likely it is the United States will attempt such creative arguments to try to bring back the U.N. sanctions on Iran. As we wrote in our as we wrote on 6 January extensive 2020 Annual Forecast, Iran's continued nuclear escalation and the possible U.S. argument to snap back sanctions on Tehran will likely result in "either the de facto or de jure end of the Joint Comprehensive Plan of Action."

Tehran later today lashed out at the European countries and appeared to threaten unspecified retaliation. "Of course, if the Europeans... seek to abuse (this process), they must also be prepared to accept the consequences," the foreign ministry said in a statement. - 'Back to full compliance' - But the three powers said they "once again express our commitment" to the deal and expressed "determination to work with all participants to preserve it." "Our hope is to bring Iran back into full compliance with its commitments under the JCPoA," they said.

Iran's continued nuclear escalation and the possible U.S. argument to snap back sanctions on Tehran will likely result in "either the de facto or de jure end of the Joint Comprehensive Plan of Action."

"We do this in good faith with the overarching objective of preserving the JCPOA and in the sincere hope of finding a way forward to resolve the impasse through constructive diplomatic dialogue while preserving the agreement and remaining within its framework," they added."In doing so, our three countries are not joining a campaign to implement maximum pressure against Iran."

The JCPOA's Joint Commission now has 15 days to discuss the dispute mechanism, another 15 days to set up an advisory board to provide a nonbinding opinion and five days to consider a resolution.

It seems that the European strategy here is to buy time. The optimistic scenario is that they’ve done this to keep Trump happy and hope to stretch out the dispute process until the November U.S. elections.

This whereby the only way the Europeans could reach something is to either provide Iran with meaningful economic relief, even if that provokes Washington’s ire or to mediate between Tehran and Washington to de-escalate tensions.