The end of the world, whether caused by the Hadron Collider or not, by many 'true believer' is seen as the fulfillment of the divine prophecies that are described in Revelation.

Ideas have a history, and few will doubt that the history of the ‘end of the world’ is a cherished tradition that started with the rise to fame of the "Apocalypse of St. John" (even the author has remained unknown to date).

And while most will remember the Jehovah's Witnesses, the Millerites and Hal Lindsey, those who did most make the myth survive into the modern era where Isaak Newton in England, Joachim of Fiore in Italy, and Hildegard of Bingen in the German speaking lands. 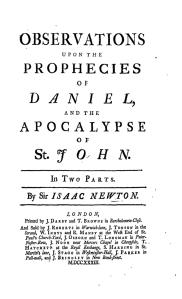 Joachim of Fiore (ca. 1135-ca. 1202) was raised and educated to serve as an official in the royal court of the Norman king in southern Italy, but he was drawn to the life of "a wandering holy man," the same calling that sent John to the seven churches of Asia Minor. Joachim took monastic vows and later founded a monastery in the rugged reaches of the Calabrian countryside, where he was inspired to undertake a study of the scriptures in an effort to crack the divine secrets that were hidden away in Holy Writ.

When Joachim started to read the book of Revelation, he hoped to find "the key of things past, the knowledge of things to come," as he puts it, "the opening of what is sealed, the uncovering of what is hidden." (Quoted in Richard Emmerson and Bernard McGinn, eds. The Apocalypse in the Middle Ages. Cornell Univ. Press, 1992, p. 532.)

He became convinced, for example, that human his­tory is divided into three ages, each one corresponding to a "person" of the Trinity-the Father, the Son, and the Spirit. The first age lasted until the crucifixion of Jesus, the second age was in progress during Joachim's lifetime and would end with the arrival of the Antichrist, and the third age-an age of spiritual peace and perfection-would begin only after the Antichrist is defeated. And, echoing the words of Jesus himself, Joachim expressed his conviction that the final battle between God and Satan was at hand.

No less commanding a figure than Richard the Lion-Hearted, the leg­endary English king, called on Joachim on his way to the Holy Land during the Third Crusade in 1190-1191 to find out what Revelation might foretell about his own fate. And the old monk obliged the crusader-king by revealing that when John sees "a beast rise up out of the sea" in the book of Revelation, he is actually glimpsing the Saracen army that Richard would soon face in the battle for Jerusalem. Soon thereafter, Joachim assured Richard, Jesus Christ would return to earth to undertake the final crusade against the Antichrist, the long-promised battle of Armageddon. ''And this Antichrist (he sayde) was already borne in the citie of Rome, and should be there exalted in the Apostolical see," Joachim is shown to say to King Richard in a sixteenth-century Protestant tract. ''And then shall the wicked man be revealed, whom the Lord shall consume with the spirits of his mouth and shall destroye with the brightness of his coming."

The Antichrist, in other words, would be the pope himself.

Hildegard of Bingen, who today is still respected as a visionary in such books like “Illuminations of Hildegard of Bingen” by Matthew Fox (2002), along with Joachim, used Revelation as a weapon against the church itself: "In her vagina there appeared a monstrous and totally black head with fiery eyes, ears like the ears of a donkey, nostrils and mouth like those of a lion," Hildegard writes in her account of the vision that came to her as she prayed. (Quoted in McGinn, Visions of the End: Apocalyptic Traditions in the Middle Ages. Columbia University Press, 1998, p.101.)

Significantly, if also surprisingly, Hildegard's preachments were not con­demned by the church. Hildegard was so credible and so compelling that the archbishop under whose authority she lived and worked found him­self forced to concede that her visions "were from God," and so did the pope himself. Indeed, a monk was assigned to serve as her scribe so that the prophecies issuing from Hildegard's mind and mouth would be promptly and accurately preserved, and she corresponded often and at length with popes, emperors, kings, and churchmen all over Europe.

And so Hildegard reminds us, that a charismatic man or woman might succeed in catching and holding the attention of an audience by invoking the power of Revelation.

The self-made apocalyptic seer who literally put the apocalyptic idea on the best-seller lists of America was a colorful and charismatic preacher named Hal Lindsey (b. 1930). After studying at the Dallas Theological Seminary, a center of premillennialist doctrine, Lindsey went on the road as a preacher for the Campus Crusade for Christ. Inspired by the lively response to the sermons on Bible prophecy that he delivered in the late 1960s, Lindsey and his collaborator, C. C. Carlson, went public with his prediction that the end was near with the publication of The Late Great Planet Earth in 1970.

Like the "medieval best sellers" of an earlier age, Lindsey's book repur­posed and reinterpreted the text of Revelation and other apocalyptic pas­sages of the Bible in terms that made sense to contemporary readers. And Lindsey was rewarded with best-seller status that far exceeded even the Scofield Reference Bible and, significantly, reached far beyond the custom­ary readership of Christian fundamentalist texts and tracts. The Late Great Planet Earth sold more than 20 million copies, and Lindsey was hailed by the New York Times as "the best-selling author of the 1970s." (Timothy P. Weber, Living in the Shadow of the Second Coming: American Premille­narianism 1875-1982. Univ. of Chicago Press, 1987, p.211.) Bart Ehrman goes even further and declares that Lindsey is "probably the single most read author of religion in modern times." (Ehrman, Jesus: Apocalyptic Prophet of the New Millennium, Oxford Univ. Press, 1999, p.7.)

Lindsey comes across in The Late Great Planet Earth as media savvy and thoroughly modern, but he is only the latest in a long line of apocalyptic preachers that reaches all the way back to the author of Revelation him­self. And, like the author of Revelation, he condemns all ideas about religion except his own, and he suggests that diversity and toleration in matters of faith are, quite literally, the tools of Satan.

"Satan loves religion, which is why he invades certain churches on Sunday," Lindsey writes, hinting but never stating exactly which churches he regards as the "throne of Satan." "Religion is a great blinder of the minds of men." (Lindsay, Apocalypse Code, 1997, p.131-32.)

No doubt another sensationally successful media enterprise that demon­strates the power of the apocalyptic idea in its purest and simplest form, is the Left Behind series by Tim LaHaye.

This protracted account of the Tribulation and the antics of the Antichrist, spawned not merely a string of novels but a multi­media empire, including books, comics, newsletters, audios, videos, and a Web site called "The Left Behind Prophecy Club." Significantly, the publisher spun off a separate series especially for young readers, titled Left Behind' The Kids, which now consists of an additional forty titles. While Hal Lindsey was hailed as the best-selling author of the 1970s for sell­ing 20 million copies of The Late Great Planet Earth, the Left Behind series has reportedly sold more than 50 million copies since the first title was published in 1995. And the end-surely to the disappointment of its authors-is nowhere in sight.

Aside from the Left Behind series, LaHaye's fifty books include tracts that condemn the United Nations, gay sexuality, "secular humanism," and various other bogeymen of Christian fundamentalism. And LaHaye himself readily acknowledges that the Left Behind series is a yet another weapon in the struggle for the hearts and minds of his fellow Americans.

Significantly, both Hal Lindsey and Tim LaHaye are Christian Zionists. "The hands on Israel's prophecy clock leaped forward on June 8, 1967," writes Tim LaHaye in The Beginning of the End(1973), an apocalyptic tract that predates the Left Behind series, "when the Israeli troops marched into the Old City ofJerusalem."

More recently then, Ronald Weinland's book 2008 - God's Final Witness,  predicts that the US will be destroyed within two years.

But scientific doom saying changes nothing at all for apocalyptic true believers. The end of the world, whether caused by the Hadron Collider or not, it is still seen as the fulfillment of the divine prophecies that are described in Revelation.