While the pandemic has been raging through the world one cannot avoid noticing also the economic impact. In order to stop the spread of the Covid-19 outbreak, many countries across the world have started implementing very tough measures. Countries and world capitals have been put under strict lockdown, bringing a total halt to major industrial production chains.

One of the visible signs especially for someone like me are the many travel restrictions.

The crisis no doubt also changes the world of commerce. The COVID-19 pandemic has pushed the world into a recession. For 2020 it will be worse than the global financial crisis. The economic damage is mounting across all countries, tracking the sharp rise in new infections and containment measures put in place by governments.

For example, French GDP is set to shrink by 6 percent in the first quarter of 2020, according to estimates by the country’s central bank. Meanwhile, in Germany, economic research institutes presented a report predicting the country’s economy is going to shrink by 4.2 percent this year. 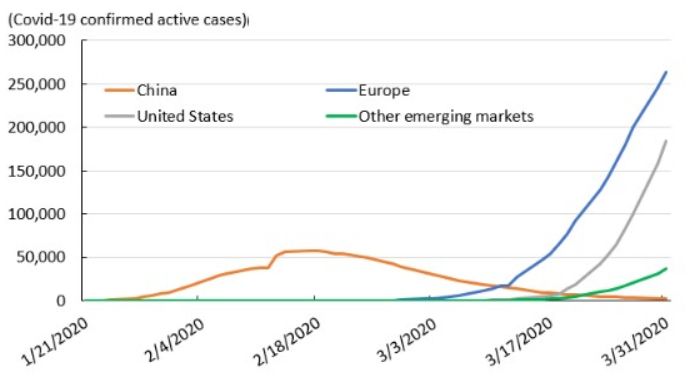 Most bosses and workers have been through economic crises before. They know that each time the agony is different—and that each time entrepreneurs and firms adapt and bounce back. Even so, the shock rippling through the business world is daunting. With countries accounting for over 50% of world GDP in lockdown, the collapse in commercial activity is far more severe than in previous recessions. The exit path from lockdowns will be precarious, with uneasy consumers, a stop-start rhythm that inhibits efficiency, and tricky new health protocols. And in the long run, the firms that survive will have to master a new environment as the crisis, and the response to it accelerate three trends: an energizing adoption of new technologies, an inevitable retreat from freewheeling global supply chains and a worrying rise in well-connected oligopolies. 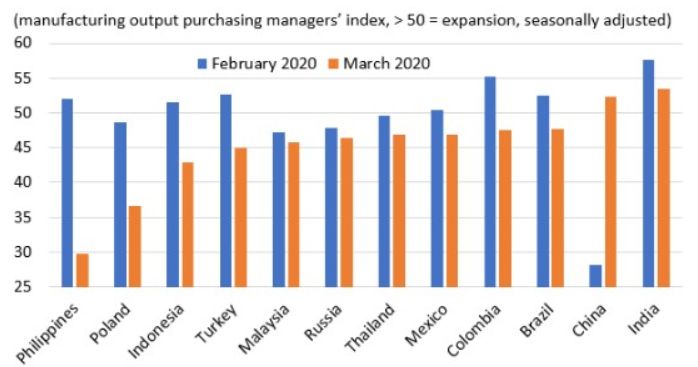 Many firms are putting a brave face on it. Pumped with adrenalin, bosses are broadcasting rousing messages to their staff. Usually, ruthless corporate giants are signing up for public service. The Parisian purveyor of Dior perfume is distilling hand-sanitizer, General Motors wants to make ventilators as well as pickups, and Alibaba’s founder is distributing masks worldwide. Cut-throat rivals in the retail trade are co-operating to ensure supermarkets are stocked. Few listed firms have made public their calculations of the financial damage from the freeze in business. As a result, Wall Street analysts expect only a slight dip in profits in 2020.

Don’t be fooled by all this. In the last recession, two-thirds of big American firms suffered a fall in sales. In the worst quarter, the median drop was 15% year-on-year. In this downturn, falls of over 50% will be familiar, as high streets become ghost towns and factories are shut. Numerous indicators suggest extreme stress. Global oil demand has dropped by up to a third; the volume of cars and parts shipped on America’s railways has dropped by 70%. Many firms have only enough inventories and cash to survive for three to six months. As a result, they have started to fire or idle workers. In the fortnight to March 28th, 10m Americans filed for unemployment benefits. In Europe, perhaps 1m firms have rushed to claim state subsidies for the wages of inactive staff. Dividends and investments are being slashed.

The pain will deepen as default cascade through domestic payment chains. h&m, a retailer, is asking for rent holidays, hurting commercial-property firms. Some supply chains linking many countries are stalling because of factory closures and border controls. Italy’s lockdown has disrupted the global flow of everything from cheese to jet-turbine components. China’s factories are cranking back into action. Apple’s suppliers bravely insist that new 5g phones will appear later this year, but they are part of an intricate system that is only as strong as its weakest link. Hong Kong’s government says its firms are reeling as multinationals cancel orders and ignore bills. The financial strain will reveal some astonishing frauds. Luckin Coffee, a vast Chinese chain, has just admitted brewing its books.

In the past two recessions, about a tenth of firms with credit ratings defaulted worldwide. Which survive now depends on their industry, their balance-sheets, and how easily they can tap government loans, guarantees, and aid, which amount to $8trn in big Western economies alone. If your firm sells confectionery or detergent, the outlook is good. Many tech companies are seeing surging demand. Small firms will suffer most: 54% in America are closed temporarily or expect to be in the next ten days. They lack access to capital markets. And without friends in high places, they will struggle to get government help. Only 1.5% of America’s $350bn aid package for small firms has been disbursed so far, and Britain’s effort has been slow, too. Banks are struggling to deal with different rules and a flood of loan applications (see article). Resentment could rage for years.

Once exits from lockdowns start and antibody testing ramps up, a new, intermediate phase will begin. Firms will still be walking, not running (China is still only functioning at 80-90% of capacity). Ingenuity, not just financial muscle, will become a source of advantage, allowing cleverer firms to operate closer to full speed. That means reconfiguring factory lines for physical distancing, remote monitoring, and deep cleans. Consumer-facing firms will need to reassure customers: imagine conferences handing out n95 masks with the program, and restaurants advertising their testing regimes. Over a quarter of the world’s top 2,000 firms have more cash than debt. Some will buy rivals to expand their market share or secure their supply and distribution.

The job of boards is not just to keep afloat, but also to assess long-run prospects. The crisis is set to amplify three trends. First, quicker adoption of new technologies. The planet has a crash course in e-commerce, digital payments, and remote working. More medical innovations beckon, including gene-editing techniques. Second, global supply chains will be recast, speeding the shift since the trade war began. Apple has just ten days’ worth of inventory, and its leading supplier in Asia, Foxconn, 41 days. Firms will seek bigger safety buffers and a critical mass of production close to home using highly automated factories. Cross-border business investment could drop by 30-40% this year. Global firms will become less profitable but more resilient.

The last long-term shift is less specific and more unwelcome: a further rise in corporate concentration and cronyism, as government cash floods the private sector and big firms grow even more dominant. Already, two-thirds of American industries have become more concentrated since the 1990s, sapping the economy’s vitality. Now some powerful bosses are heralding a new era of co-operation between politicians and big businesses—especially those on the ever-expanding list of firms that are considered “strategic.” Voters, consumers, and investors should fight this idea since it will mean more graft, less competition, and slower economic growth. Like all crises, the COVID-19 calamity will pass, and in time a fresh wave of business energy will be unleashed. Far better if this is not muffled by permanently supersized government and a new oligarchy of well-connected firms.

And once the crisis is over? What then? How do we imagine the restart? Before he was forced to retreat, US President Trump evoked the image of churches filling at Easter. Will the world economy rise from the dead? Are we going to rely once more on the genius of modern logistics and the techniques of dollar-finance to stitch the world economy back together again? It will be harder than before. Any fantasy of convergence that we might have entertained after the ‘fall of communism’ has surely by now been dispelled. We will somehow have to patch together China’s one-party authoritarianism, Europe’s national welfarism and whatever it is the United States will be in the wake of this disaster. But in any case, for those of us in Europe and America, these questions are premature. The worst is just beginning.