Update 16 June 2020: China claims agreement with India to deescalate the situation has been reached.  India said the clash arose from "an attempt by the Chinese side to unilaterally change the status quo" on the border plus that there were over 40 Chinese casualties.

Recently the Washington Post including various Indian and Chinese news outlets caused alarm by asking if India and China could go to war.

This while India and China step up vigil, in Ladakh and Sikkim sectors of the Line of Actual Control (LAC), where India and China have deployed additional troops, days after scores of Indian and Chinese soldiers were involved in a tense face-off along the India-China boundary.

As described in an earlier article the 1959 war had more to do with domestic problems in China, including the disastrous Great Leap Forward campaign launched in the late 1950s which resulted in widespread famine and sparked opposition within the Communist Party against leader Mao Zedong, whereby also later India and China did not have a well-defined border, and troop face-offs are common along its 3,500 km Line of Actual Control (LAC).

Today's nationalism-driven maneuvers could also be a means for Xi to deflect attention from his government’s often opaque handling of the Covid-19 crisis.

The Global Times’ recent mention of the 1962 war makes several references to what Beijing seems to believe is a new US-India alliance against China.

The border can be broadly divided into three sectors—Western, Middle, and Eastern. The Western sector, which includes Ladakh, is governed by the Johnson Line, making Aksai Chin (controlled by China) in Jammu and Kashmir contested territory for India.

The Middle sector, consisting of Uttarakhand and Himachal, is relatively tranquil. Even map exchanges between the two countries have taken place, based on a broad understanding of borders.

In the Eastern Sector (where Indian controls territory based on the MacMahon Line), China claims Arunachal Pradesh as part of southern Tibet, while India contests it. The MacMahon Line was drawn at the tripartite 1913-14 Simla Convention attended by British India, Tibet, and China; the problem: Tibet is involved and China is not a signatory to this pact.

At the epicenter of the growing crisis is the Doklam plateau, which sits at the tri-junction of India, China, and Bhutan, near the northeastern Indian state of Sikkim. In June, the Bhutanese army objected to the Chinese constructing a road in territory that it says is within its sovereignty. 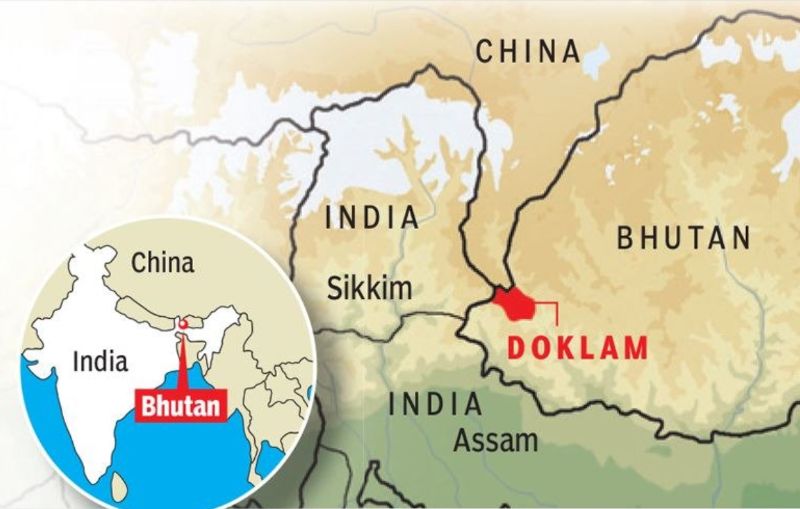 The two countries—which share the world’s longest unmarked border—fought a full-fledged war in 1962 and have since engaged in several small skirmishes. Not since 1975 has a bullet been fired across their shared border. As a result, the theory that Sino-Indian clashes are flashes in the pan and unlikely to lead to more extensive fighting has become a widely held consensus. Recent events, however, suggest that escalations are highly possible. Both sides have substantial—and growing—military deployments along a mostly disputed border. And for more than a decade, the People’s Liberation Army (PLA) has been testing India’s military readiness and political resolve along with several strategic areas. Peace can no longer be taken for granted. 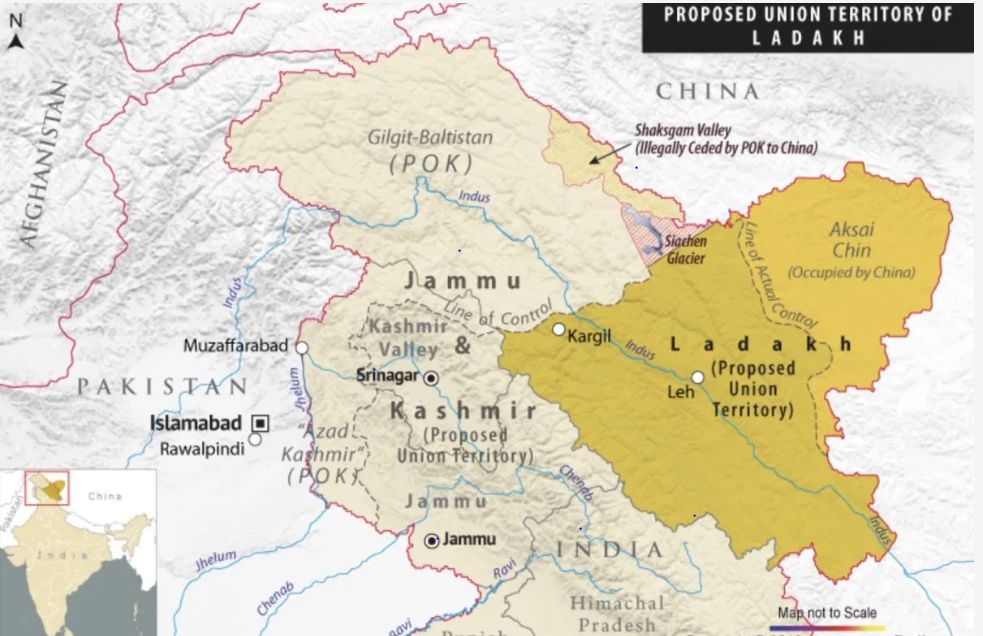 The most recent clashes took place earlier this month. On May 5, Indian and Chinese soldiers clashed near the Pangong Tso lake in Ladakh. It is believed that the skirmish took place because the PLA had objected to Indian military patrols in the area. Most of these clashes apparently stem from differing assessments of the location of the so-called Line of Actual Control—the de facto international border. And then on May 9, at an altitude of 15,000 feet, in the Naku La region near Tibet, soldiers from both sides came to blows and threw stones at each other mostly in efforts to induce the Indian troops to move back from the areas they were patrolling. No arms were used but several dozen soldiers were injured, including a senior Indian officer who was required to be airlifted to a hospital.

According to the Indian government, the Chinese military crossed into Indian territory 1,025 times between 2016 and 2018. Given that China and India’s borders remain unmarked, such transgressions are likely rooted in how Beijing and New Delhi have different perceptions about the extent of their territories.

After a long period of relative quiet along the Sino-Indian border, militarized incidents have come to the fore again. In 2017, when Indian and Chinese troops faced off for two months in Doklam, an area claimed by both Bhutan and China, a serious military clash was a distinct possibility. While that particular crisis abated, it is perhaps instructive to see the standoff not as an aberration but as part of a new phase in relations between the two countries. The old phase dates back to 1988, a year after a military skirmish between India and China in the Sumdorong Chu Valley in Arunachal Pradesh, when Indian Prime Minister Rajiv Gandhi visited his counterpart Deng Xiaoping in Beijing to mend ties. The two leaders agreed to establish a forward-looking relationship even as important issues such as the border dispute were temporarily set aside. The reason for this pragmatism was rooted in economic and strategic factors: Both China and India needed a stable external environment to promote domestic economic development. China was already a decade into the dramatic economic reforms that Deng had initiated, while Gandhi’s India had also embarked on a similar path, albeit hesitantly.

The 1988 compromise between India and China, helped in part by New Delhi’s studious silence on developments within Tibet, was driven by the fact that the two countries were near equals on the world stage. According to the World Bank, India’s gross domestic product was $297 billion compared with China’s $312 billion that year, while India’s defense spending, at $10.6 billion, was also close to the Chinese allocation of $11.4 billion.

The material balance of power between China and India has dramatically changed since then. At $13.6 trillion in 2018, China’s GDP is now more than five times India’s $2.7 trillion. Similarly, China spent $261.1 billion on defense expenditure in 2019, almost four times India’s total of $71.1 billion. While India has risen as an economy and a global power in the past three decades, its relative strength to China has in fact greatly declined.

A new economic dynamic means that the underlying bedrock of the Gandhi-Deng bargain—of similar means and goals—is fizzling out. Although it remains unclear when exactly the understanding between New Delhi and Beijing began to fade—most likely after the 2008 global financial crisis—China has become far more assertive in its foreign affairs in recent years, from artificial-island-building activities in the South China Sea to its muscular diplomacy amid the coronavirus pandemic. Indeed, some scholars have argued that an impending power transition is underway between China and the United States, the current global hegemon. While New Delhi has also become a more assertive player in global politics its rise has not been of much concern to the United States.

China and India’s recent border clashes look increasingly worrying in the context of these changing power dynamics. The Gandhi-Deng bargain paved the way for a number of border management agreements (including the 1993 and 1996 agreements related to confidence-building measures and the 2005 agreement on the political parameters guiding boundary negotiations). More recently, high-profile summits between the two countries’ top leaders—in Wuhan and in Mamallapuram—have played an important role in managing the overall relationship. However, even as the 1988 deal allowed relative tranquility along their border and promoted commercial links between China and India, none of their outstanding issues—including the border dispute—were actually resolved.

China and India find themselves in an “extraordinarily complex relationship,” according to Subrahmanyam Jaishankar, India’s foreign minister. In addition to the border dispute, some of the core issues in the Sino-Indian rivalry include Tibet (the presence of the Dalai Lama, the Tibetan government-in-exile, and tens of thousands of Tibetan exiles in India), the burgeoning China-Pakistan partnership, and the two countries’ overlapping spheres of influence in Asia. These issues have become more salient in the context of the two countries’ simultaneous but asymmetric rising power.

China and India’s material capabilities remain in flux; China continues to outstrip India along most axes of power even as New Delhi seeks to boost its own capabilities. According to the World Bank, India recorded higher growth rates than China every year between 2014 and 2018. While the long-term economic impact of the coronavirus pandemic remains unclear, India’s smaller economy and marginally faster growth rates mean that it has the potential to narrow its power gap with China—at least in the long term. In other words, India is the only major power that is rising with respect to China—even as China grows faster than other major powers such as Japan and the United States.

In addition to accruing power domestically, India is also building strong strategic partnerships with China’s other rivals, especially the United States and Japan. Meanwhile, a rising China has stabilized its northern borders with Russia and is working to undermine the United States’ primacy in the East Asian maritime commons through the modernization of its military and its push to build islands. This basically leaves only one border issue with a rival unresolved: namely, the Sino-Indian border. It is hardly surprising that it is exerting periodic pressure on India along this front—a trend that is only likely to escalate.

As reported today the Chinese military is rapidly increasing its troops in areas around Pangong Tso lake and Galwan Valley along the Line of Actual Control in Ladakh, sending a strong and clear signal to India that it is not ready to end its confrontation with the Indian Army anytime soon.

The Chinese side has reinforced its position in the Galwan Valley by erecting around 100 tents in the last two weeks apart from bringing in heavy equipment for construction of bunkers, despite stiff protest by Indian troops. Whereby China, in turn blames India by crossing the boundary line in Galwan Valley.