While stock markets are sliding as forecasters have cut their estimates of economic growth around the world, the more important question is how governments can best deal with the pandemic—confirming what I was suggesting as early as 30 Jan. the viruses now already have been found in at least 56 countries as case numbers outside China rise fast. Also coronavirus infections among Iran’s senior leaders are raising questions over the extent of an outbreak that has become a flashpoint in the worldwide spread of the virus. 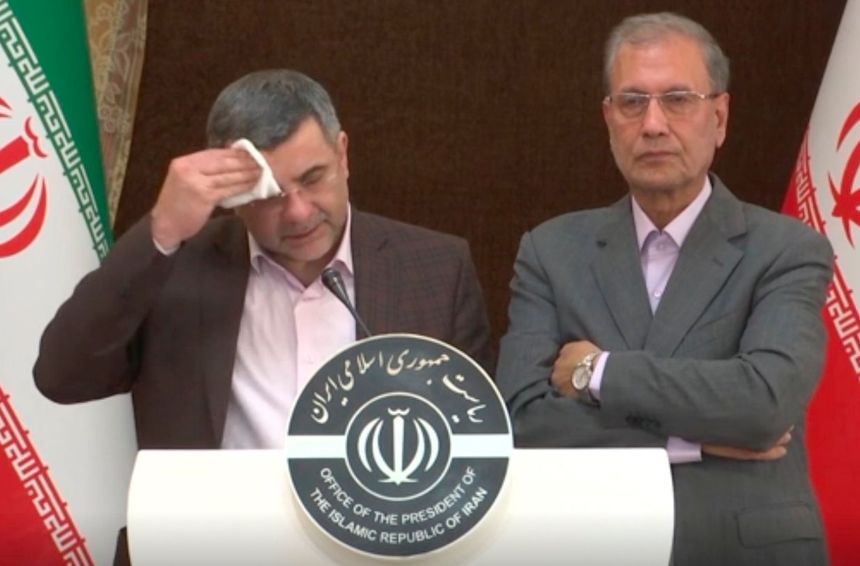 Also on 21 February, the Italian authorities announced that a cluster of 16 cases of covid-19, had been detected around Codogno, a small town in Lombardy 60km south-east of Milan. By the next day, the number was up to 60, and five older adults had died. On the 23rd, “red zones” were set up around the infected areas. Inside the zones, there is a strict lockdown; outside 500 police officers and soldiers stop people from leaving. On the same day, the government of Lombardy ordered the closure of any establishment where large numbers of people gather, including cinemas, schools, and universities. 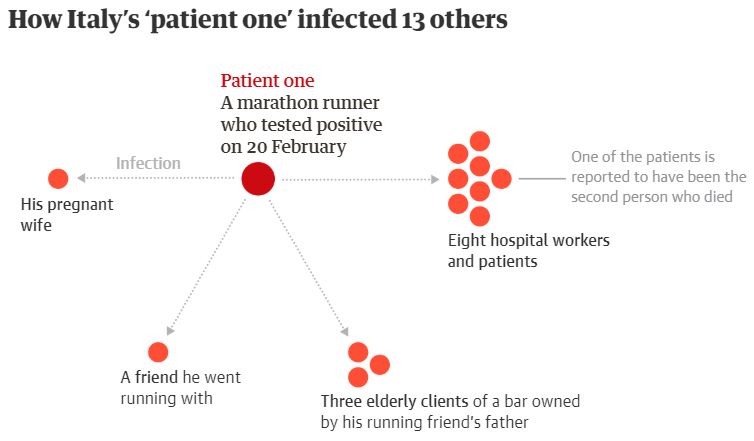 Thus officials worldwide will have to act when they do not have all the facts because much about the virus is unknown. A broad guess is that 25-70% of the population of an infected country may catch the disease. China’s experience suggests that, of the cases that are detected, roughly 80% will be mild, 15% will need treatment in hospital, and 5% will require intensive care. Experts say that the virus was maybe five to ten times as lethal as seasonal flu, which, with a fatality rate of 0.1%, kills 60,000 Americans in a bad year. Across the world, the death toll could be in the millions.

A 1918 pandemic circled the world three times over two years, infecting a third of the population and killing at least 50 million —and that was before globalization, and widespread international travel. The fact that it is still being talked about over a century later gives a measure of both the gravity of the outbreak—and the potential threat we are currently facing.

For years the public health community has been saying two important things in this respect: One, that it was only a matter of time before a serious pandemic hit again; and two, that the global health systems were woefully unprepared to tackle the emergency. 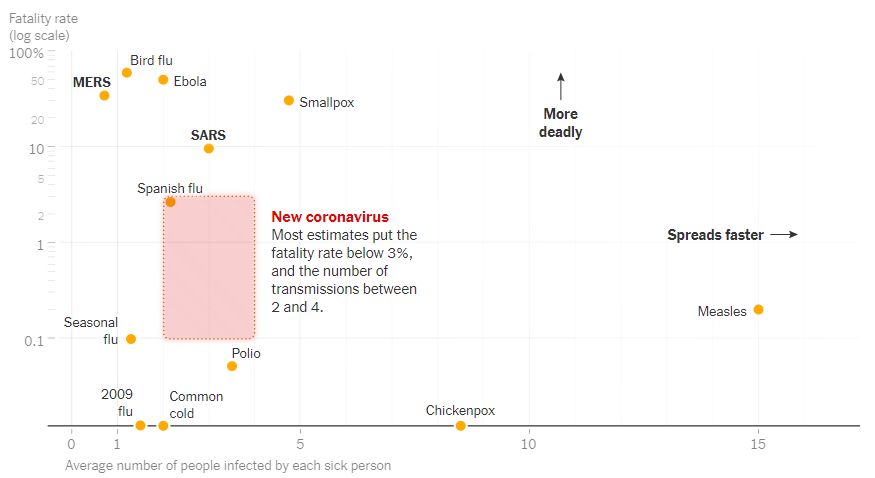 If the pandemic is like a very severe flu, models point to global economic growth being two percentage points lower over 12 months, at around 1%; if it is worse still, the world economy could shrink. As that prospect sank in during the week, the USA S&P 500 so far fell by close to 8% and is likely to drop much more. 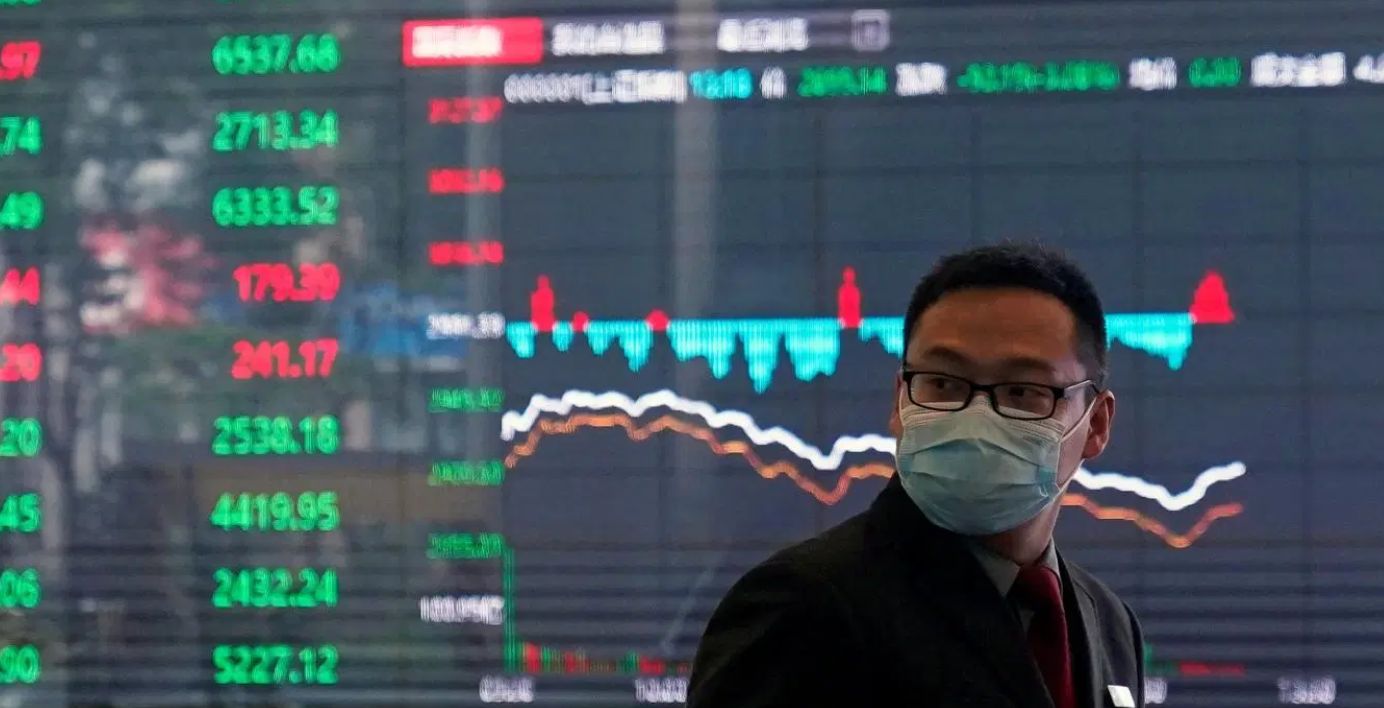 Yet all those outcomes depend significantly on what governments choose to do, as China shows. Hubei province, the origin of the epidemic, has a population of 59m. It has seen more than 65,000 cases and a fatality rate of 2.9%. By contrast, the rest of China, which contains 1.3bn people, has suffered fewer than 13,000 cases with a fatality rate of just 0.4%. Chinese officials at first suppressed news of the disease, a grave error that allowed the virus to take hold. But even before it had spread much outside Hubei, they imposed the largest and most draconian quarantine in history. Factories shut, public transport stopped, and people were ordered indoors. This raised awareness and changed behavior. Without it, China would, by now, have registered many millions of cases and tens of thousands of deaths.

The World Health Organization was this week full of praise for China’s approach. That does not, however, mean it is a model for the rest of the world. All quarantines carry a cost—not just in lost output, but also in the suffering of those locked away, some of whom forgo medical treatment for other conditions. It is still too soon to tell whether this price was worth the gains. As China seeks to revive its economy by relaxing the quarantine, it could well be hit by a second wave of infections. Given that uncertainty, few democracies would be willing to trample over individuals to the extent China has. And, as the chaotic epidemic in Iran shows, not all authoritarian governments are capable of it. 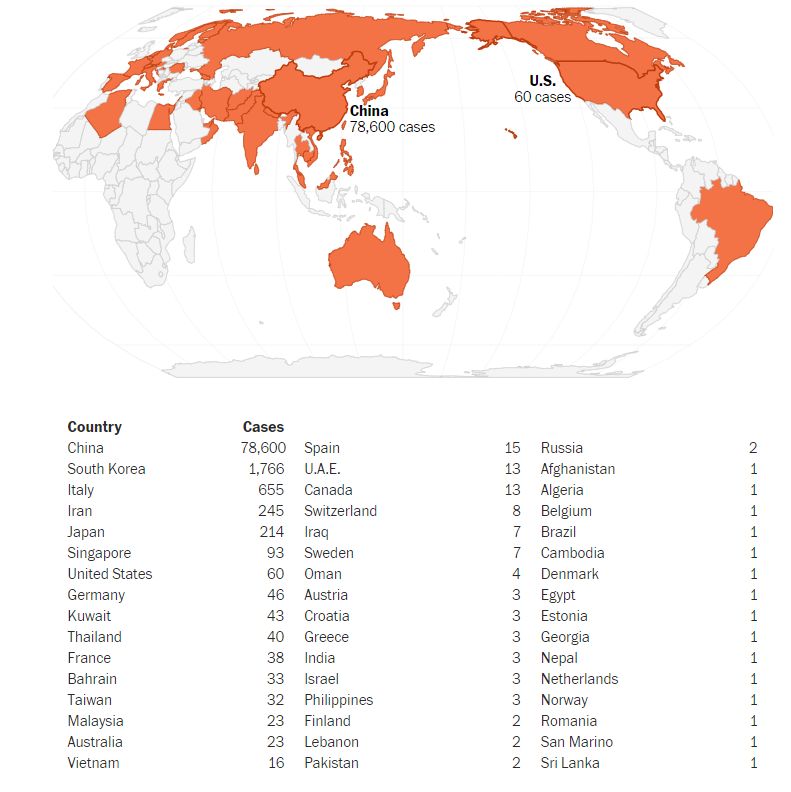 Yet even if many countries could not, or should not, exactly copy China, its experience holds three essential lessons—to talk to the public, to slow the transmission of the disease, and to prepare health systems for a spike in demand.

A good example of communication in America’s Centers for Disease Control, which issued a clear, unambiguous warning on February 25th. A bad one is Iran’s deputy health minister, who succumbed to the virus during a press conference designed to show that the government is on top of the epidemic.

Even well-meaning attempts to sugarcoat the truth are self-defeating because they spread mistrust, rumors, and, ultimately, fear. The signal that the disease must be stopped at any cost, or that it is too terrifying to talk about, frustrates efforts to prepare for the virus’s inevitable arrival. As governments dither, conspiracy theories coming out of Russia are already sowing doubt, perhaps to hinder and discredit the response of democracies.

The best time to inform people about the disease is before the epidemic. One message is that fatality is correlated with age. If you are over 80 or you have an underlying condition, you are at high risk; if you are under 50, you are not. Now is the moment to persuade the future 80% of mild cases to stay at home and not rush to a hospital. People need to learn to wash their hands often and to avoid touching their face. Businesses need continuity plans to let staff work from home and to ensure a stand-in can replace a vital employee who is ill or caring for a child or parent. The model is Singapore, which learned from SARS, another coronavirus, that clear, early communication limits panic.

China’s second lesson is that governments can slow the spread of the disease. Flattening the spike of the epidemic means that health systems are less overwhelmed, which saves lives. If like flu, the virus turns out to be seasonal, some cases could be delayed until next winter, by which time doctors will understand better how to cope with it. By then, new vaccines and antiviral drugs may be available. 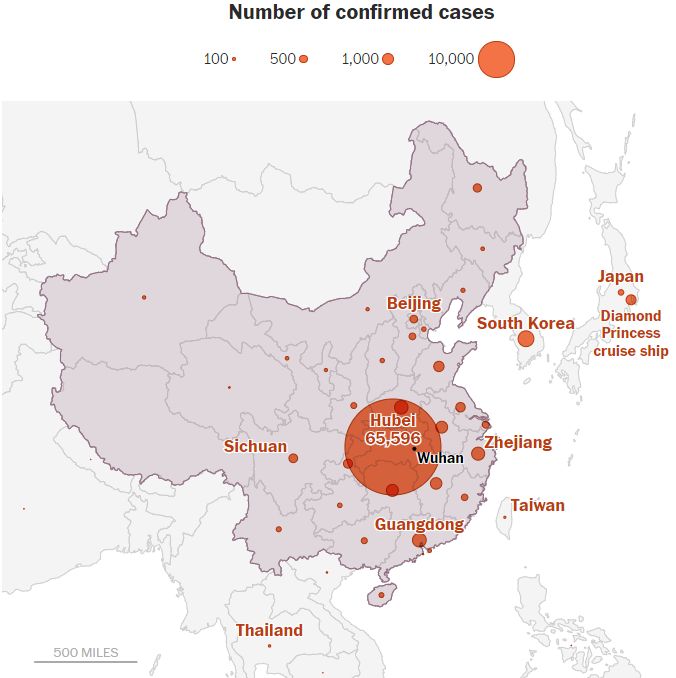 When countries have few cases, they can follow each one, tracing contacts and isolating them. But when the disease is spreading in the community, that becomes futile. Governments need to prepare for the moment when they will switch to social distancing, which may include canceling public events, closing schools, staggering work hours, and so on. Given the uncertainties, governments will have to choose how draconian they want to be. They should be guided by science. International travel bans look decisive, but they offer little protection because people find ways to move. They also signal that the problem is “them” infecting “us,” rather than limiting infections among “us.” Likewise, if the disease has spread widely, as in Italy and South Korea, “Wuhan-lite” quarantines of whole towns offer scant protection at a high cost.

The third lesson is to prepare health systems for what is to come. That entails careful logistical planning. Hospitals need supplies of gowns, masks, gloves, oxygen, and drugs. They should already be conserving them. They will run short of equipment, including ventilators. They need a scheme for how to set aside wards and floors for covid-19 patients, for how to cope if staff fall ill, and for how to choose between patients if they are overwhelmed. By now, this work should have been done.

This virus has already exposed the strengths and weaknesses of China’s authoritarianism. It will test all the political systems with which it comes into contact, in both rich and developing countries. China has bought governments time to prepare for a pandemic. They should use it.