In February, the coronavirus pandemic struck the world economy with the biggest shock since the second world war. Lockdowns and a slump in consumer spending led to a labor-market implosion in which the equivalent of nearly 500m full-time jobs disappeared almost overnight. World trade shuddered as factories shut down, and countries closed their borders. An even deeper economic catastrophe was avoided thanks only to unprecedented interventions in financial markets by central banks, government aid to workers and failing firms, and the expansion of budget deficits to near-wartime levels.

The crash was synchronized. As recovery takes place, however, huge gaps between countries' performance are opening up, which could yet recast the world’s economic order. According to forecasts by the OECD, America’s economy will be the same size by the end of next year as it was in 2019, but China’s will be 10% larger. Europe will still languish beneath its pre-pandemic level of output and could do so for several years, a fate it may share with Japan, suffering from a demographic squeeze. It is not just the biggest economic blocs that are growing at different speeds. According to UBS, a bank, the distribution of growth rates across 50 economies was at its widest for at least 40 years in the second quarter of this year.

The variation is the result of differences between countries. Most important is the spread of the disease. China has all but stopped it while Europe, and perhaps soon America, is battling a costly second wave. Over the past week, Paris has closed its bars, and Madrid has gone into partial lockdown. In China, meanwhile, you can now down sambuca shots in nightclubs. Another difference is the pre-existing structure of economies. It is far easier to operate factories under social distancing than running service-sector businesses that rely on face-to-face contact. Manufacturing makes up a bigger share of the economy in China than in any other big country. A third factor is the policy response. This is partly about size: America has injected more stimulus than Europe, including spending worth 12% of GDP and a 1.5 percentage point cut in short-term interest rates. But the policy also includes how governments respond to the structural changes and creative destruction the pandemic is causing.

As our special report, this week explains, these adjustments will be immense. The pandemic will leave economies less globalized, more digitized, and less equal. As they cut risks in their supply chains and harness automation, manufacturers will bring production closer to home. As office workers continue to work in their kitchens and bedrooms for at least part of the week, lower-paid workers who previously toiled as waiters, cleaners, and sales assistants will need to find new jobs in the suburbs. Until they do, they could face long spells of unemployment. In America, permanent job losses are mounting even as the headline unemployment rate falls (see article).

As more activity moves online, the business will become more dominated by firms with the most advanced intellectual property and the biggest repositories of data; this year’s boom in technology stocks gives a sense of what is coming, as does the digital surge in the banking industry (see our leader on Ant Group). And low real interest rates will keep asset prices high even if economies remain weak. This will widen the gulf between Wall Street and Main Street that emerged after the global financial crisis, worsening this year. The challenge for democratic governments will be to adapt to all these changes while maintaining popular consent for their policies and free markets.

That is not a concern for China, which so far seems to be emerging from the pandemic strongest—at least in the short run. Its economy has bounced back quickly. Later this month, its leaders will agree on a new five-year plan, emphasizing Xi Jinping’s model of high-tech state capitalism and increasing self-sufficiency. Yet the virus has exposed longer-term flaws in China’s economic apparatus. It has no safety net worth the name, and this year, it had to focus its stimulus on firms and infrastructure investment rather than shoring up household incomes. And in the long run, its surveillance and state control system, which made brutal lockdowns possible, is likely to impede the diffuse decision-making and free movement of people and ideas that sustain innovation and raise living standards.

Europe is the laggard. Its response to the pandemic risks ossifying economies there, rather than letting them adjust. In its five biggest economies, 5% of the labor force remains on short-work schemes in which the government pays them to await the return of jobs or hours that may never come back (see article). In Britain, the proportion is twice as high. Across the continent, suspended bankruptcy rules, tacit forbearance by banks, and a flood of discretionary state aid risk prolonging zombie firms' lives that should be allowed to fail. This is all the more worrying given that, before the crisis, France and Germany were already embracing an industrial policy that promoted national champions. If Europe sees the pandemic as a further reason to nurture a cozy relationship between government and incumbent businesses, its long-term relative decline could accelerate.

The question-mark is America. For much of the year, it got the policy balance roughly right. It provided a more generous safety-net for the jobless and a larger stimulus than might have been expected in the home of capitalism. Wisely, it also allowed the labor market to adjust and has shown less inclination than Europe to bail out firms in danger of becoming obsolete as the economy adjusts. Partly as a result, unlike Europe, America already sees the creation of many new jobs.

Instead, America’s weakness is toxic and divided politics. This week President Donald Trump seemed to ditch talks over renewing its stimulus, meaning that the economy could fall over a fiscal cliff. Whether to redesign the safety net for a tech-driven economy or to put deficits on a sustainable course, critical reforms are all but impossible. At the same time, two warring tribes define compromise as weakness. Covid-19 is imposing a new economic reality. Every country will be called on to adapt, but America faces a daunting task. If it is to lead the post-pandemic world, it will have to reset its politics.

The Pandemic has hit the world economy with the biggest shock since the second world war. It has also created big performance disparities between countries. According to forecasts by the OECD, America’s economy will be the same size by the end of next year as it was in 2019, but China’s will be 10% larger. The pandemic will also leave economies less globalized, more digitized, and less equal. It is accentuating global trade imbalances. Its legacies will include even lower interest rates and even higher asset prices. As the better-off work on in their kitchens, lower-paid workers may face long spells of unemployment. In America, permanent job losses are mounting even as the headline unemployment rate falls, yet there is a once-in-a-generation surge in startups. And some existing businesses are booming. Despite a slowdown in global trade, for example, the shipping industry is having a banner year.

Another industry enjoying a COVID-19 bonanza is digital finance. A new era is dawning: conventional banks now account for only 72% of the global banking and payments industry's total market value, down from 81% at the start of the year and 96% a decade ago. Leading the charge against them globally is Ant Group, which began life as a payments service on Alibaba, a Chinese e-commerce giant, but is about to sell shares in the biggest initial public offering in history, which could value the company at over $300bn, more than any bank in the world. Ant’s rise worries hawks in the White House and enthralls global investors. It portends a bigger transformation of how the financial system works—not just in China but around the world. 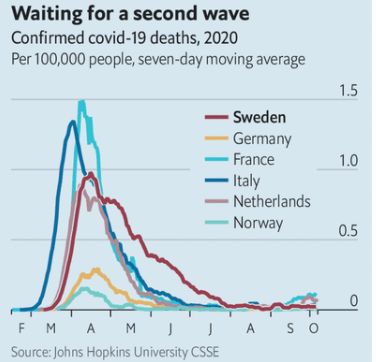 Sweden has become a much-cited example in the debate about how to deal with COVID-19. Held up as a champion of liberty, it is, in fact, the home of pragmatism. So its policy is hardly one of the COVID defiance displayed by President Donald Trump. Nor does Trump’s injunction not to let the virus dominate people’s lives offer much consolation to the world’s poor, suffering its consequences. In Latin America, for example, years of progress in reducing poverty and inequality are being wiped out. Everywhere, the hope is a vaccine will be available soon. Britain is already making preparations to inoculate 30m people. Countries differ in their views of who should get access to a vaccine first. However, until one arrives, people in rich countries are getting used to facing up to a subject many had learned to put to one side: death. 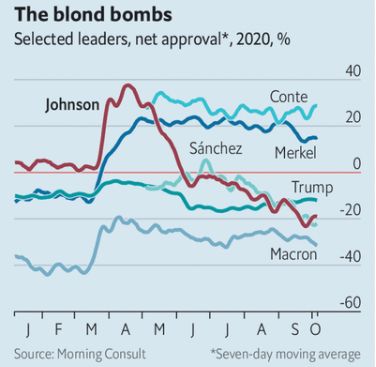 The pandemic is also damaging perceptions of governments and national leaders, perhaps nowhere more than in Britain. In a survey by YouGov, a pollster, of how citizens of 22 countries think their government has managed the pandemic, Britain bumps along at or near the bottom. The ratings of the prime minister, Boris Johnson, have plunged in consequence. Similarly, in Israel, in indefinite nationwide lockdown, approval of Binyamin Netanyahu, the prime minister, has handled the pandemic has slumped in polls from 58% in April to just 27%. It will be scant consolation to the leaders concerned to know that it is a worldwide trend for people to lose trust in their governments as citizens gain access to the internet.

The historian Henry Adams once noted that politics is about the systematic organization of hatreds. Voters who have lost their jobs, have seen their businesses close, and have depleted their savings are angry. There is no guarantee that this anger will be channeled in a productive direction by the current political class—or by the ones to follow if the politicians in power are voted out. A tide of populist nationalism often rises when the economy ebbs, so mistrust among the global community is almost sure to increase. This will speed the decline of multilateralism and may create a vicious cycle by further lowering future economic prospects. That is precisely what happened in between the two world wars, when nationalism and beggar-thy-neighbor policies flourished.

There is no one-size-fits-all solution to these political and social problems. But one prudent course of action is to prevent the economic conditions that produced these pressures from worsening. Officials need to press on with fiscal and monetary stimulus. And above all, they must refrain from confusing a rebound for a recovery.