While on 22 Nov.2019 I posted an extensive article about Hong Kong in perspective and explaining why China's great rejuvenation by 2049 might be elusive, now, in a stunning development here we are mapping Hong Kong's new reality. 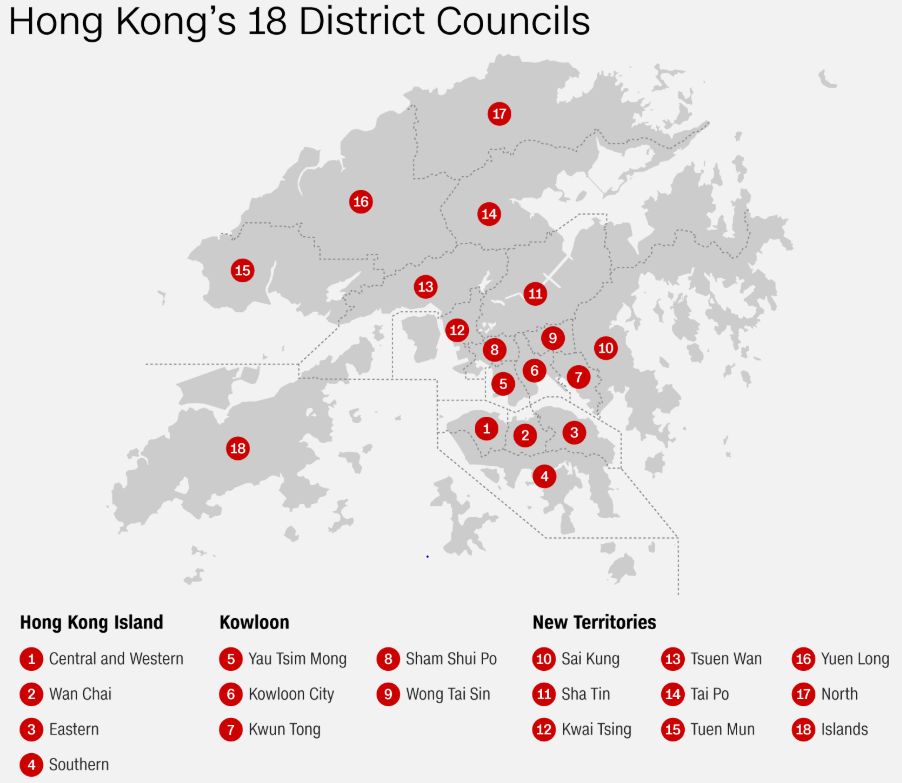 The anti-government anger boiling up over nearly six months of protests made its mark in polling stations across Hong Kong on Sunday, when voters turned out in their droves to back the pan-democrats over their pro-establishment rivals. By noon on Monday, the pro-democracy camp seized 17 out of 18 district councils, taking more than 392 of the 452 seats. All councils were previously under pro-establishment control after its candidates dominated the 2015 election.

In the following blue is pro-Beijing yellow the Democratic candidates: 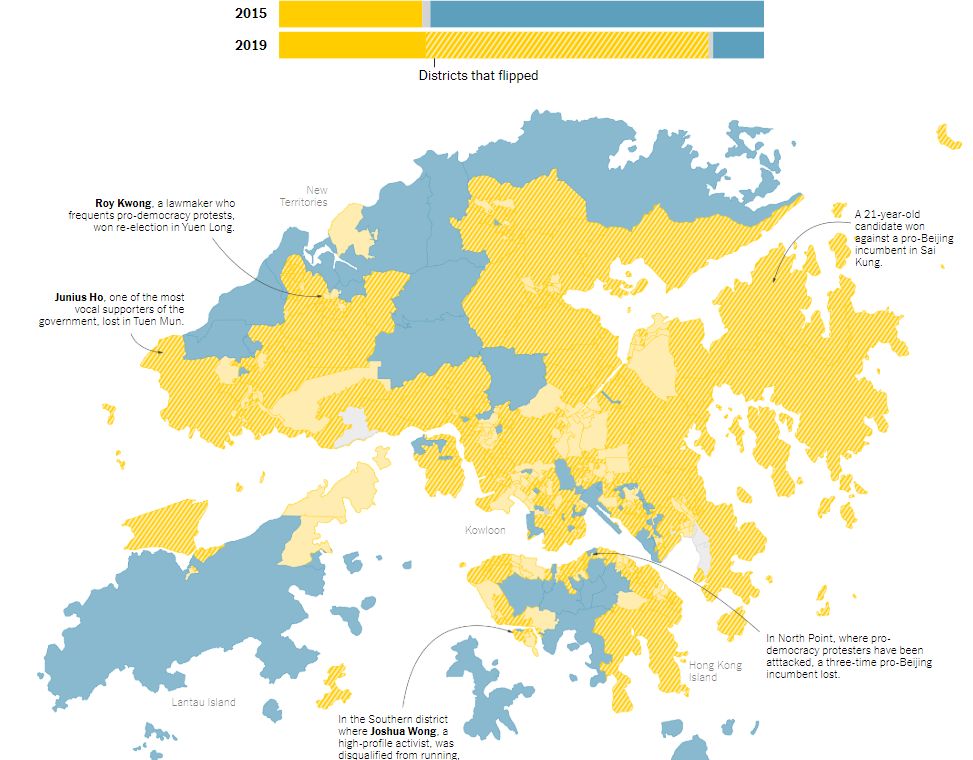 This year also set a record with 4 million registered voters, 390,000 of those newly registered:

As shown below many district council candidates who had actively participated in recent protests won, suggesting that popular support for the pro-democracy movement has solidified. Some had been targeted in attacks. Others had been caught up in violent clashes during protests, with some even arrested and charged. 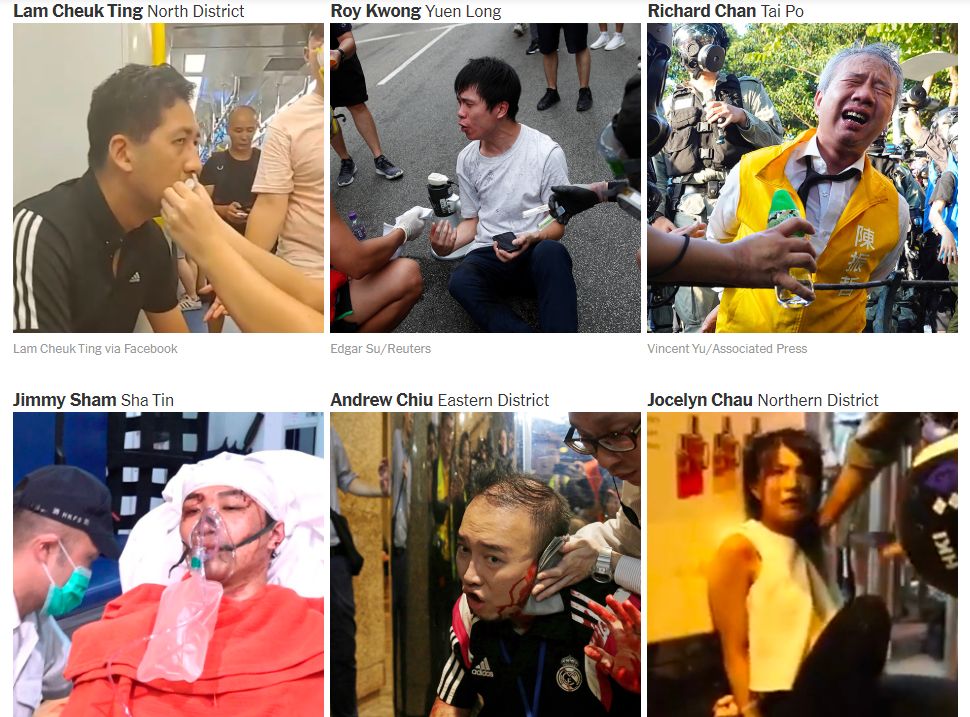 These district council members are now eligible to be elected to six seats in the Legislative Council and will control 117 votes in the 1,200-member chief executive election committee.

The victory of the pro-democracy movement could now be seen as a window of opportunity to find a way out of the political impasse and may as well be a turning point if the Beijing and Hong Kong governments accept the verdict of the people.

The government, however, could also ignore the political meanings of the results altogether and that would certainly provoke strong reactions which lead to a new round of street battles between the police and the protesters.

In any case, the landslide victory will help lay the foundation for the 2020 legislative council elections, because the pro-democracy camp will have more resources for political campaigns after grabbing district election seats.

In Hong Kong one country, two systems is officially due to expire in 2047. That is why Hong Kong’s voters are so desperate, and why the harmony Xi talks so blithely of creating in China might elude him.

Meanwhile on Tuesday during lunchtime Hong Kong protesters returned to city streets to keep pressure on government and show support for radicals at Polytechnic University.

The district councillors-electand Ipsaid they spoke with the PolyU administration. They suggested that the administration should re-enter and take back responsibility to manage the campus, so as to pressure the police to lift the siege. 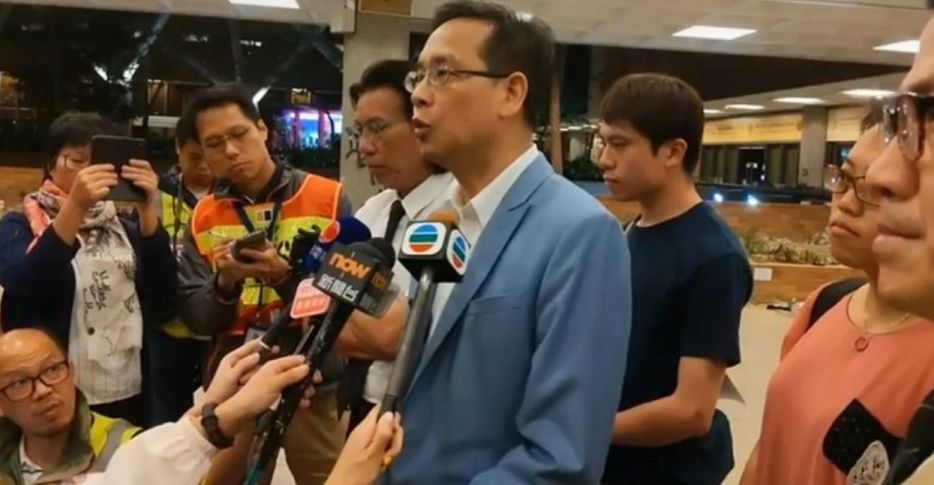 PolyU management however next issued a statement saying that as of 1pm, staff have managed to search and clear four of the buildings on the main campus, without discovering any remaining protesters. Photo: InMedia.

Li, a consultant in her 20s who turned up in Central, believed police should retreat from PolyU and those inside to leave, while the government should listen to protesters’ five demands, which she said were the root cause of the PolyU confrontation.

“The government should not just find a resolution to handle the incident at PolyU, they should also find a way to resolve the root causes of the protests once and for all,” she said.

In Kowloon Bay, some protesters put a loaf of Life Bread, a local brand, on the railings to protest an officer’s remark to PolyU radicals.

Xi says he wants China to achieve its great rejuvenation by 2049, the 100th anniversary of Mao’s victory. By then, he says, the country will be “strong, democratic, culturally advanced, harmonious and beautiful”. More likely, if the party remains in power that long, Mao’s unfinished business will remain a terrible sore. Millions of people living in the outlying regions that Mao claimed for the party will be seething.

But as it made clear in its Hong Kong policies announced in the Communist party’s Fourth Plenum, it would tighten up its governance of Hong Kong through stepped-up control of its government and the police.

It has also pledged to empower security agencies to enforce Chinese sovereignty in the city, and to intensify patriotic education, especially among young people and school children. It may also limit the powers of the local district councils now that they are dominated by democrats.

“The electoral results are a huge embarrassment to the entire pro-Beijing camp,” associate professor Kenneth Chan with the department of government and international studies at Hong Kong Baptist University told NBC News.

“I have talked to a few of them and they’re struggling to come up with an answer. The verdict has been passed and the government cannot ignore the public opinion," he said, adding that Lam is waiting for Beijing’s order for her next move.

“She doesn’t know what to do. The whole country has no idea about the scale and importance of this election."

A full-page advertisement on Tuesday in Hong Kong’s Sing Pao newspaper by a “group of voters who safeguard Hong Kong’s future” read: “In the past five months, the public demands have been clear. Carrie Lam, what have you heard? What have you changed? Do not dwell on empty talks about deep reflection, resignation is the only result.”

So all eyes are now on how Hong Kong's pro-Beijing authorities will act.

Andrew O’Neil, professor of politics at Griffith university in Australia, said despite its problems, Hong Kong remained resilient and had retained its flexibility and legal structure. Intervention, he felt, was unlikely because of the massive cost to Beijing.

“But it’s still not certain. If you’d asked six months ago would the army intervene if there were battles in the street and the authorities losing control of infrastructure, then most would have said yes. But they haven’t and a lot of people think that is significant. The question is how much more it has to escalate before the PLA intervenes?”

As for Xi, his intolerance of dissent and his vulnerability to bad information have made his government much more prone to policy blunders. Making matters worse, because a strongman must maintain an image of virtual infallibility, even demonstrably ineffective or counterproductive policies are unlikely to be reversed.

For now, Xi’s grip on power is probably secure. But with decision-making dynamics at the top unlikely to change, he will become vulnerable to more challenges in the coming months. Indeed, 2020 may turn out to be Xi’s worst year yet.