"Apocalypse Never: Why Environmental Alarmism Hurts Us All" by Michael Shellenberger.

As the reason for his book, Shellenberger writes: Much of what people are being told about the environment, including the climate, is wrong, and we desperately need to get it right. I decided to write Apocalypse Never after getting fed up with the exaggeration, alarmism, and extremism that are the enemy of a positive, humanistic, and rational environmentalism. 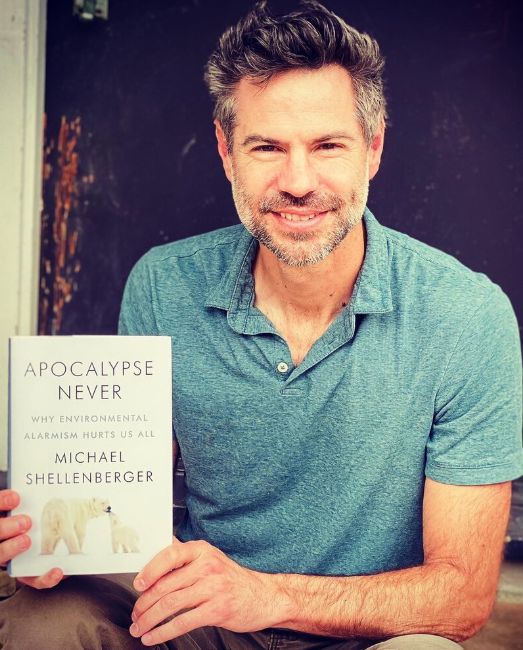 “Around the year 2030, in ten years, 250 days, and ten hours, we will be in a position where we set off an irreversible chain reaction beyond human control that will most likely lead to the end of our civilisation as we know it,” said student climate activist Greta Thunberg, in 2019. “I don’t want you to be hopeful. I want you to panic.”

Bringing another quote from Greta Thunberg:

"In August 2019, Thunberg sailed from Europe to New York to set an example of how to live without emitting carbon. But Greta’s renewable-powered sailboat trip across the Atlantic produced four times more emissions than flying. The reason was that sailing required a sailboat crew, who flew back home afterward.

In this context Shellenberger has much to say about the underdeveloped world and especially also the two parts of Congo:

Anyone interested in seeing the end of the world up close and in person could do little worse than to visit the Democratic Republic of the Congo in central Africa. The Congo has a way of putting first-world prophecies of climate apocalypse into perspective. I traveled there in December 2014 to study the impact of widespread wood fuel use on people and wildlife, particularly on the fabled mountain gorillas.

Whereas in January 2019, Thunberg had paid lip service to the need for poor nations to develop, in September she said, “We are in the beginning of a mass extinction and all you can talk about is money and fairy tales of eternal economic growth.”

Arguing that that economic growth is what could lift places like the Congo out of poverty, a Congo that "saved the whales"... "Economic growth is necessary for creating the infrastructure required for protecting people from natural disasters, climate-related or not. And economic growth created Sweden’s wealth, including that of Thunberg’s own family. It is fair to say that without economic growth, the person who is Greta Thunberg would not exist."

Modern-day alarmism can be said to date back to Thomas Malthus in the 18th century yet his challenge of feeding a growing population led instead to technological innovation and that produced a solution: higher agricultural productivity and falling food prices. Far from leading to starvation, more humans exchanging ideas and innovation have ensured that the supply of food rose to meet growing demand.

What Malthus failed to foresee were technical advances, vaccinations, and pesticides that would make it possible to feed the enormous rise in human population.

Shellenberger in this context proceeds by writing that:

Not surprisingly many people who are the most alarmist about environmental problems are also the most opposed to the technologies capable of addressing them.

Thus young people learning about climate change for the first time might understandably believe, upon listening to, talented as she might be, Thunberg, that climate change is the result of deliberate, malevolent actions. In reality, it is the opposite. Emissions are a by-product of energy consumption, which has been necessary for people to lift themselves, their families, and their societies out of poverty, and achieve human dignity. Given that’s what climate activists have been taught to believe, it’s understandable that so many of them would be so angry.

Conventional air pollution peaked fifty years ago in developed nations and carbon emissions have peaked or will soon peak in most others. The amount of land we use for meat production is declining. Forests in rich nations are growing back and wildlife is returning. There is no reason poor nations can’t develop and adapt to climate change. Deaths from extreme events should keep declining. Cruelty to animals in meat production has declined and should continue to decline, and, if we embrace technology, habitats available for endangered species, including for gorillas, and penguins, should keep growing in size. None of that means there isn’t work to do. There is plenty. But much if not most of it has to do with accelerating those existing, positive trends, not trying to reverse them in a bid to return to low-energy agrarian societies.

We need to go beyond rationalism and re-embrace humanism, which affirms humankind’s specialness, against Malthusian and apocalyptic environmentalists who condemn human civilization and humanity itself. As environmental humanists, whether scientists, journalists, or activists, we must ground ourselves first in our commitment to the transcendent moral purpose of universal human flourishing and environmental progress, and then in rationality.

Specifically, rich nations should lift the various restrictions on development aid for energy production in poor and developing nations. It is hypocritical and unethical to demand that poor nations follow a more expensive and thus slower path to prosperity than the West followed. As the last nations to develop, it is already going to be harder for them to industrialize. The good news is that in many nations, including African ones, cheap hydroelectricity, and natural gas will likely be available. But if coal is the best option for poor and developing nations, then rich nations in the West must support that option.

As the cradle of humankind’s evolution, the Albertine Rift region is of great significance to people everywhere. The presence of the endangered mountain gorillas, our evolutionary cousins, magnifies its importance. Despite the success of gorilla protection, much of the conservation activities in the region have failed in the absence of military security and economic development.

Cheap hydroelectricity from the Grand Inga Dam could power the southern African region, including the factories, which remain the only way we know how to transform large numbers of unskilled subsistence farmers into city people. The main opposition to the dam outside of the Congo comes from apocalyptic environmentalists. Environmental humanists should stand up to them.

The West owes Congo a significant debt. The palm oil it provided the world helped save the whales, a magnificent achievement. But its people continue to suffer. Belgians colonized and created the nation but then abandoned it in the early 1960s, leaving the country in disarray. Neither the United States nor the Soviet Union covered itself with the glory there during the Cold War.

Since the end of the Cold War, the United Nations and Western nations have failed to end the worsening violence in Eastern Congo, which most experts believe stems from Rwanda’s desire to maintain chaos as cover for continued mineral extraction. Many of the experts I interviewed believe Western governments are afraid to demand change from Rwanda out of some mix of guilt for having failed to stop the 1994 genocide and fear that the region will return to civil war.

Until then, conservationists and environmental humanists have an interest in advocating for a resolution to the ongoing insecurity, which has traumatized generations of people with no end in sight.

The United States and other developed nations should renew the commitments they made under “atoms for peace” in the 1950s in the form of a Green Nuclear Deal, for reasons including but going beyond climate change.

If journalists and activists spent more time talking to people about their daily struggles in places like Indonesia and the Congo, they would be less likely to see the end of the world, and reason to panic, in every new environmental problem.

And ends his book with:

"While environmental alarmism may be a permanent feature of public life, it need not be so loud. The global system is changing. While that brings new risks, it also brings new opportunities. Confronting new challenges requires the opposite of panic. With care, persistence, and, I dare say, love, I believe we can moderate the extremes and deepen understanding and respect in the process. In so trying, I believe we will bring ourselves closer to the transcendent moral purpose most people, perhaps even some currently apocalyptic environmentalists, share: nature and prosperity for all."