For an earlier article following the 2011 visit by Hillary Clinton and the US-China rivalry over influence in Myanmar/Burma, see:

Underneath the Shwedagon Pagoda in Yangon (Rangoon) seen from my (Summit Parkview) hotel room: 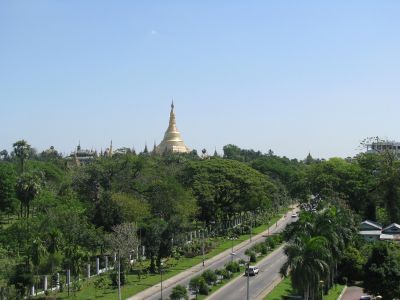 The Shwedagon is not just a tall spire. It has volume too, taking up the size of a couple of city blocks. It can be seen for miles. It is always a magical scene at night with groups of young monks, nuns, or students praying and chanting in the light of thousands of candles. Last time I was here, on September 24, 2007, almost 20,000 monks and nuns took part in the largest protest in 20 years and marched at the Shwedagon Pagoda.

Since then, especially considering the November elections, much is changing in Yangon. But in the countryside outside the center of Myanmar, the ruling generals still silence their opponents and take their people down a rabbit hole of, dictatorship, and oppression. While Suu Kyi’s NLD has secured a majority of the contested seats, the military still holds 25 percent of the seats in both houses. Therefore, although the NLD has control over legislation it does not have control over constitutional amendments, which require 75 percent support from the parliament. Through it all – the worsening poverty, the collapse of the education system, an epidemic of secret informers, the sale of its precious natural resources to neighboring China, the disastrous decisions based on psychics and numerology, and the attacks on ethnic minorities, the generals continue to grow ridiculously rich. Thus despite the NLD's sweeping win, public doubts linger about the military's government role given its record of political intervention and lucrative network of businesses that could be impacted by future policy shifts.

With all the optimism about the Aung San Suu Kyi transition talks, it is easy to forget that Myanmar remains embroiled in several of the world's longest-running civil wars. A divided nation, there are no less than 15 different armed rebel groups active in Myanmar. Even the day I arrived, authorities once again blocked human rights day events. Considered "Aafaltering peace process" the outgoing government has signed ceasefires with many of the ethnic armies, but many have broken down. For example, more than 20 years ago a ceasefire was agreed with the Myanmar National Democratic Alliance Army in the Kokang region of Shan state, yet ongoing fighting with that group has recently cost over 100 lives and displaced thousands of civilians, many of whom have fled across the border to China.

"Peace starts now" was the headline splashed in capital letters across the front page of Myanmar’s state-backed newspaper on 15 October. It was an ambitious statement on the day the government and eight armed groups signed a ceasefire agreement intended to end 60 years of ethnic warfare, but one that many would dismiss as pure propaganda.

It is clear that the so called peace accord is a useful campaign tool for the government, which is dominated by former military men and serving officers who hold a constitutionally mandated 25 percent of parliamentary seats. The ruling Union Solidarity and Development Party can claim it as a sign of its commitment to reform as it went into the 8 November elections, but even the ceasefire’s name is misleading. The agreement can hardly be considered “nationwide”, since it excludes the majority of Myanmar’s approximately two dozen armed groups, including some of the most powerful ones.

Only two groups signing the accord could be considered genuine rebel armies: the Karen National Union, KNU, and the Restoration Council of Shan State, RCSS and its Shan State Army South. A third, the Democratic Karen Benevolent Army, or DKBA, has, in effect, been a militia on the side of the government since it broke from KNU in 1994. The fourth group, a Karen faction, is small, more of a civil society organization than a rebel army.

The fifth, the All-Burma Students Democratic Front has not been a fighting force to be reckoned with since the 1990s. The Chin National Front is a small, mainly unarmed group, and the Arakan Liberation Party is a tiny outfit with no presence in Rakhine State. It consists of a dozen or so people staying in KNU areas near the Thai border and should not be confused with the Arakan Army, which fights alongside the Kachin Independence Army, KIA, in the north. The last of the “rebel armies,” the Pa-O National Liberation Organization is a one-man show led by a person who lives in Chiang Mai, Thailand, who set it up when the main rebel Pa-O National Organization/Army entered into a ceasefire agreement with the government in 1991.

None of Burma’s main ethnic armies active in the north signed the agreement – among them the above mentioned KIA with approximately 8,000 soldiers and the country’s largest ethnic army, the more than 20,000-strong United Wa State Army, or UWSA, and their allies in northern and eastern Shan State. A total of about 40,000 ethnic troops is not part of the deal with the government. Observers see the less than half-baked agreement as little more than a face-saving gesture of the government-appointed Myanmar Peace Center, which has received vast amounts of money from the European Union and others. After several years of talks, the MPC needed something to show international donors to justify what in reality amounts a failure to achieve peace across the country. 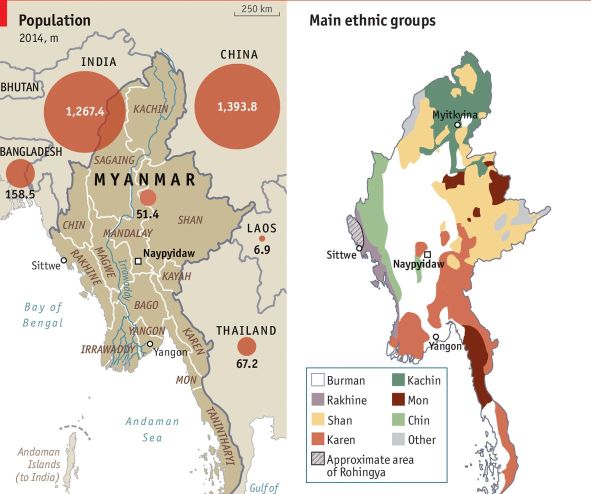 Meanwhile, mob violence against Muslim Rohingyas that began in 2012 in the western state of Rakhine points to further conflict. Thousands have since fled by sea and overland, often aided (or kidnapped) by human traffickers. And as recent as 3 Dec.2015, the United States called for a credible, independent investigation by Myanmar's government of reports of military atrocities in the country's Shan State. And at the time of writing (12 Dec. 2015) heavy fighting is also going on in Kachin State (my next stop).

As will be detailed below, prior to British colonization, Burma or Myanmar, as it is known today, did not exist. Rather, the region consisted of independent kingdoms; Burman, Mon, Shan, Rakhine, Manipuri, Thai, Lao and Khmer kingdoms were located throughout the region, and were engaged in constant conflict.

On 12 February 1947 General Aung San expecting a handover by the British, signed the Panglong agreement with representatives of the Shan, Chin and Kachin people, three of the largest of the many non-Burman ethnic groups that today make up about two-fifths of Myanmar’s population. The agreement said that an independent Kachin state was “desirable”, and promised “full autonomy in internal administration” to “Frontier Areas”, as today’s ethnic states were then known. Aung San was assassinated just over five months later. Under the 60 years of mostly military rule that followed, the spirit of the Panglong agreement has never been honoured.

Since achieving independence in 1948, Burma has experienced near constant internal conflict. However, it was not the abolition of the old monarchy by the British in the late 19th century that forebode the disaster that came after independence in 1962. Rather, Myanmar’s inability to become a functioning national entity is the fact that the country, with its present borders, is a colonial creation bringing together peoples and ethnic groups with little in common, and even centuries of conflicts with the Burman kings that predate British rule. 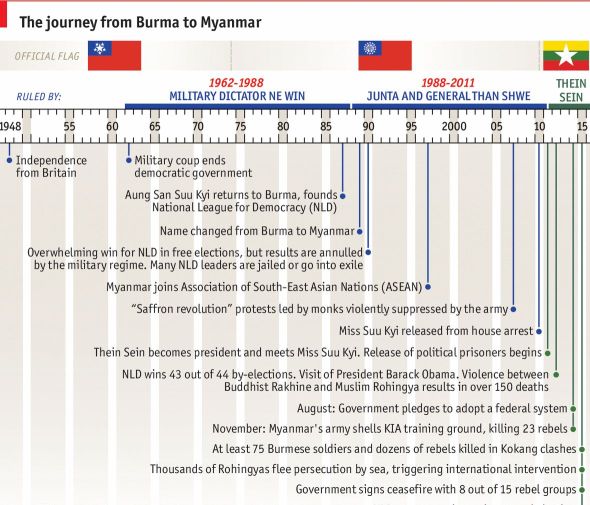 As can be seen from what is presented, World War II was to have a dramatic impact on the Frontier Areas. Not only did British, American, Japanese and Chinese nationalist armies enter the territory, but the semi-permeable barriers that the British had created between the minority peoples and the ethnic majority, the Bamar, were removed during and after the Japanese Occupation. As it became apparent soon after the end of the war that Myanmar's political independence was not only inevitable but imminent, elites throughout the country began to make claims and counter-claims about the historic rights of "their people". Ethnicity now was transformed from an object of discussion and a principle of organization to political rallying cry. A plethora of nationalist claims were advanced. The "federal" constitution that the country adopted at independence in 1948 was the result of compromises that the British had encouraged, and General Aung San achieved, at the Panglong Conference in 1947. One of the primary requirements of the first constitution of independent Myanmar was to reshape the state to meet those expectations and in that it failed. Today a discussion was published stating:  ‘It Is Not Enough for Elites Simply to Get Along’. 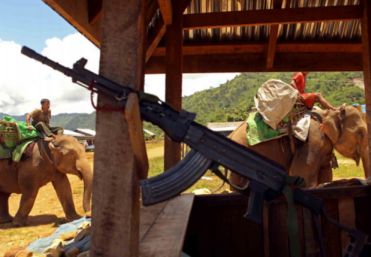 A lot of the current fighting is taking place in the area around Hpakant, not surprising one of the leading jade-producing zones. Plus concern NLD goes the way of AFPFL in the parliamentary era of the 1950s. To Myitkyina and Kachin State. 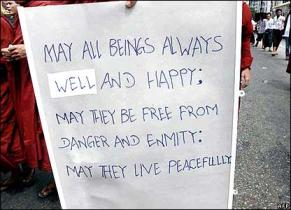 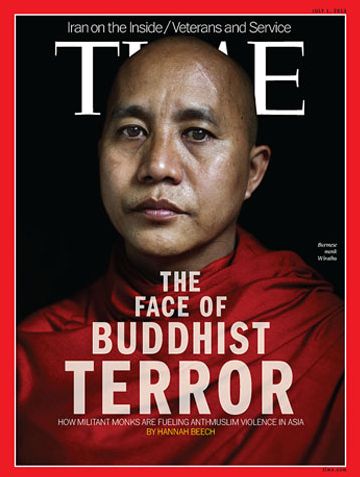 P.3 ethnic cleansing in Sittwe: Among others the 969 movement (by some seen as influenced by the psywar department) and how intolerance threatens Myanmar’s nascent transition to a more open, democratic state. Two kinds of Monks.

On the left rural market, on the right walking through Shan State 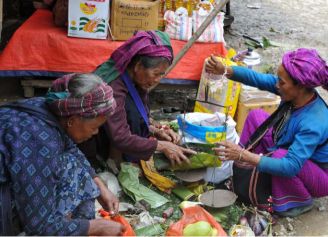 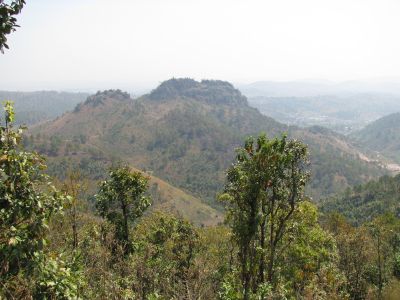 P.4 Shan State: Even after having signed a ceasefire, the Burmese military continued to attack the Burma Army and the Shan State Progress Party/Shan State Army-North areas. Ethnic rebels in the north of Burma, such as the Kachin Independence Army (KLA) and the Ta’ang National Liberation Army (TNLA), have accused the Burmese government of actively participating in the drug trade, whilst at the same time claiming to be cracking down on it. The Challenge of Unity in a Divided Country. 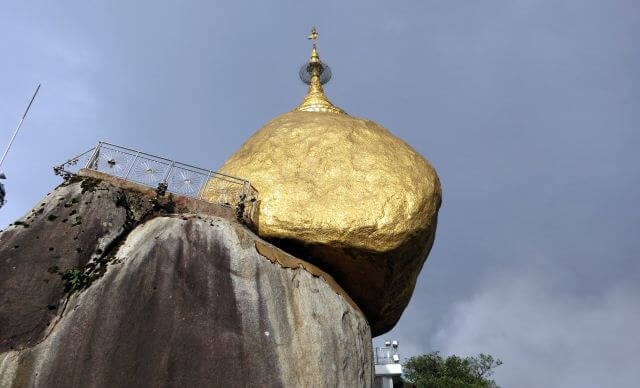 Traveling through Myanmar P.5: If the Kachin have suffered the most at the hands of the Burmans in recent years, it is the Karen who have fought them for the longest. Past the Golden Rock to Karen (Kayin) State. 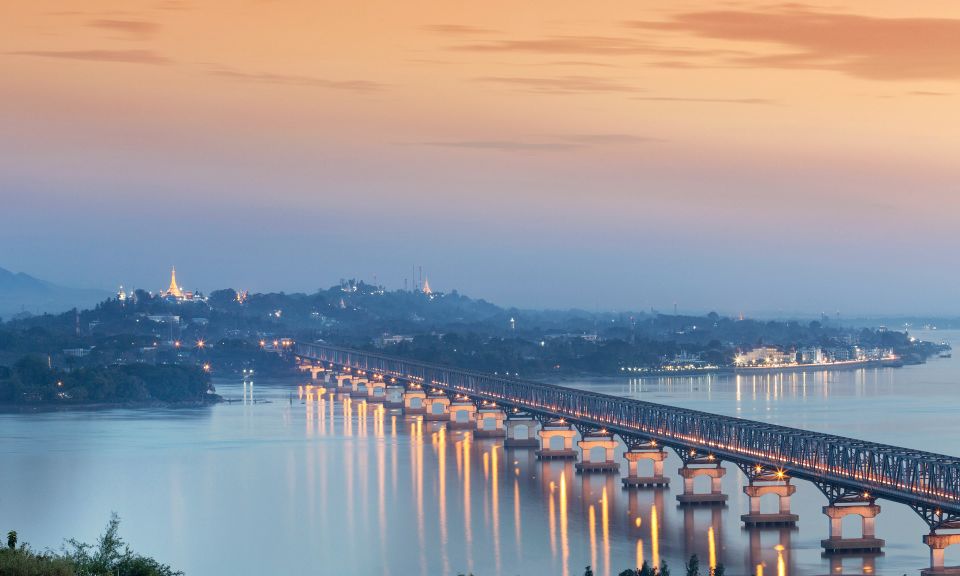 P.6: Moulmein, Orwell, Kipling, the Mon, including revisiting the bizarre insurgency of two teenage boys. Mawlamyine and beyond.