High-security 1,000-capacity courtroom has been built in Calabria, with cages to hold the defendants 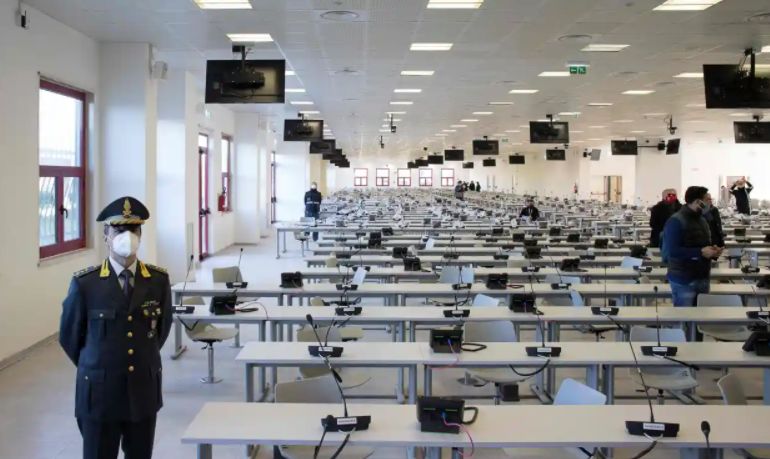 "The law is equal for all" reads the title in Lamenzia where Italy's biggest mafia trial in decades will start tomorrow, with more than 300 defendants linked to the powerful crime group, the 'Ndrangheta, to appear amid high security. 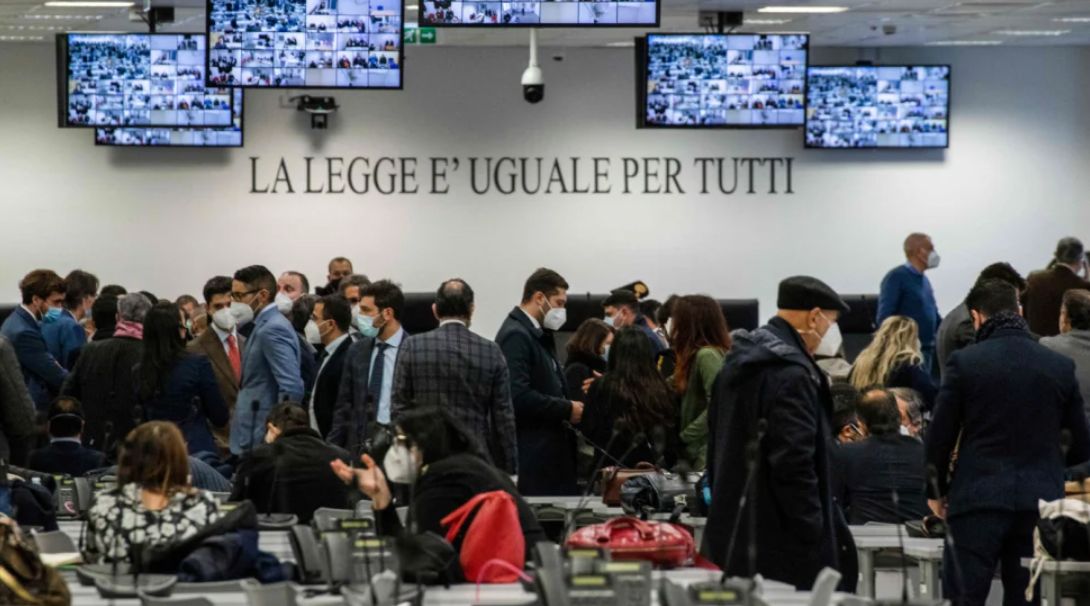 But there is an odd aspect to this, Freemasonry. For example, the investigation conducted by prosecutor Nicola Gratteri revealed a mixture of 'Ndrangheta, politics, and Freemasonry.

The National Anti-Mafia and Counter-Terrorism Directorate (DNAA) affirmed the enormous interest of Cosa Nostra and 'Ndrangheta linked to Freemasonry, indicating 193 subjects with double membership of which 122 from the Grand Orient of Italy; 58 to the GLRI, 9 to the GLI and 4 to the Serenissima. 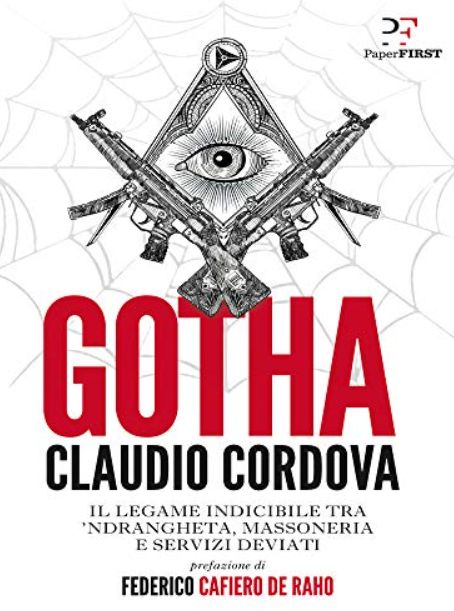 Calabria, the region in the ‘toe’ of the Italian ‘boot’, is home to the Ndrangheta. Of all the world’s gangster fraternities, the Ndrangheta has the best claim to being global: it has colonies in northern Italy, northern Europe, North America, and Australia. Regional and local government has been beset for decades by organized criminal influence, and the dilapidated rural communities of Calabria are home to some of Europe’s biggest drug traffickers. The Ndrangheta is no mediocre mafia.

In October 2011, in a farm building in one of those rural communities, police listening devices recorded the local ’ndrangheta boss, Pantaleone ‘Uncle Luni’ Mancuso: ‘The ’ndrangheta doesn’t exist anymore! … The ’ndrangheta is part of Freemasonry … let’s say, it’s under Freemasonry. But they’ve got the same rules and stuff … Once upon a time the ’ndrangheta belonged to the rich folk! After, they left it to Giuliano Di Bernardo, the university professor who, between 1990 and 1993, was the Grand Master of Italy’s biggest and most prestigious Masonic order, the Grand Orient. In June 2019, speaking through the beard that makes him resemble an Armani-suited Karl Marx, Di Bernardo testified before a Calabrian court. He recalled his shock when, as Grand Master, he looked into the state of Masonry in Calabria: ‘I discovered that twenty-eight of thirty-two Lodges were governed by the ’ndrangheta. So at that moment, I decided to leave the Grand Orient.’

Calabria has provided plenty of fuel for conspiracist newspaper headlines that are as confusing as they are inflammatory – along the following lines: ‘Mafia boss says, “Freemasons run the ’ndrangheta!’” ‘Former Grand Master confesses, “The ’ndrangheta runs the Freemasons!”’ On 1 March 2017, on the orders of the permanent Parliamentary Commission of Inquiry into the Mafia, police mounted dawn raids on the offices of the four biggest Masonic orders, and confiscated membership lists. Their search concentrated on Freemasonry in Calabria and Sicily, Italy’s most notorious mafia hotbeds.

The raids by the Parliamentary Commission of Inquiry brought back Masons’ memories of similar raids twenty-five years earlier. At that time, a sprawling criminal investigation had sought to map hundreds of criminal and wheeler-dealer networks over the impossible tangle of different Masonic orders, Lodges, and rites – both regular and irregular, open and covert. In 1993, the confiscated membership lists were leaked, and Italy’s Freemasons were named in many newspapers. Some Brothers reported receiving anonymous threats in the aftermath; others said they were cold-shouldered by friends. (Strangely, the lists in the press excluded all but a tiny number of the women Masons from mixed orders.) Eventually, in 2000, a court in Rome halted the investigation, declaring that it owed more to the ‘collective imaginary’ about Freemasonry than it did to any evidence that Freemasons were infiltrating the public institutions for illicit ends. Many dismissed this ruling as a cover-up. Masons were left bitter.

Given this history, in 2017 there was a complete breakdown in trust between the members of the Parliamentary Commission of Inquiry and the Masonic leadership. The Commission’s report accused the chief Masons of being in denial about mafia infiltration, and of being ‘far from transparent and cooperative’: all four Grand Masters had refused to hand over their membership lists. Soon afterward, the Grand Master of the Grand Orient published a pamphlet that compared the Parliamentary Commission to the Inquisition. (As coincidence would have it, the Commission’s hearings are held in the same Roman palazzo where Galileo was forced to recant his scientific findings.)

Yet there is a strong sense that the Freemasonry’s dispute with the Commission of Inquiry was fueled by political grandstanding from both sides. It is worth remembering that the most senior Masons are elected: they are the Prime Ministers and Presidents of their little democracies. Denouncing anti-Masonic prejudice and evoking the memory of Masonic martyrs have always been rallying cries among the Brethren, and thus a useful electoral gambit. On the other side, it would have taken a strong-willed parliamentarian on the Commission of Inquiry to face up to the public animosity towards the Craft. In February 2017, for example, Italy’s leading current affairs magazine carried the front-page headline, ‘Let’s abolish Freemasonry’. The populist Five-Star Movement, which came to power in June 2018, has a policy of expelling Freemasons from its ranks, and Masons are often listed among its ‘establishment’ enemies.

The Ndrangheta is a curious organization, having more than twice as many members as Sicily’s Cosa Nostra, and a much more complicated structure: for example, each stage in the career ladder of an Ndrangheta is marked by a new rank with its own elaborate initiation ritual. The Calabria mafia is an underworld mirror of the Craft, which blends local autonomy for the Lodges with national and international ‘brand’ control. What we could call the Ndrangheta brand or franchise, meaning its rules, ranks, and rituals, are all centrally controlled by a body called il Crimine (‘the Crime’). Even when they are based outside Calabria, ’ndranghetisti seek authorization from the Crime to set up new cells. But the Ndrangheta is also decentralized, in that its individual clans and cells pursue all kinds of criminal activities at their own initiative. Nobody is answerable to the Crime when they smuggle in a shipment of drugs, for example.

Things began to shift in the 1970s when the Ndrangheta grew vastly richer on the profits of kidnapping, narcotics, and infiltrating public works contracts. As the money flowed in, the criminal brotherhood’s structure evolved: unbeknownst to the mass of the membership, ever more upper ranks were invented. By creating them, most senior bosses were trying to monopolize access to the money derived from infiltrating public works, and keep the peace among themselves while they did so. But they could never settle on a definitive formula, just as at various times in the history of Freemasonry, there was runaway inflation in the number of Degrees and rituals, and a fight over who got to authorize them. Such internal wrangles were one of the reasons behind savage Ndrangheta civil wars in the 1970s and 1980s. In the end, around 2001, an alliance of the most powerful bosses founded an entirely separate and highly secretive group within the Ndrangheta, so investigators believe. The group’s members include men with the kind of white-collar, political skills needed to get on with brokering corrupt deals with business and the state, while the crime bosses were left free to use their own less specialized skills to best effect. A few bosses who knew about this group have been bugged using various names to describe it: ‘the invisible ones’, for example. And because, like everyone else, Calabrian gangsters love to think of the Freemasons as the last word in occult power, they also refer to the new group, according to one supergrass, as ‘something analogous to Freemasonry’.

That is what the Ndrangheta boss Pantaleone ‘Uncle Luni’ Mancuso was doing when he was recorded in 2011 saying that the Freemasons had taken over the Ndrangheta. He was using a metaphor, as almost no one pointed out when Uncle Luni’s words were splashed over the newspapers.

But now is not the time for the Freemasons of Italy to shout their outrage at the way their reputation has been attacked because of a mere metaphor. The Gotha Trial may yet hold damning surprises in store. It is also crucial to understand that when Ndrangheta refers to Freemasonry they are not just speaking in metaphor. Masonic Lodges, real Masonic Lodges, are part of the Calabrian mafia’s pervasive networking system.

Here is how the judges think it all works. The Ndrangheta loves to get its hands on state contracts for collecting and disposing of rubbish, building and maintaining roads and hospitals, and so on. ’Ndranghetisti use mediators to wheedle their way into winning these contracts: politicians, administrators, entrepreneurs, and lawyers. Indeed, mafia organizations are only as strong as the mediators they can call on; they have a constant hunger to co-opt new ones, and will use any mix of bribery, blackmail, and intimidation to do so. This is where Masonic Lodges fit in.

Especially since the P2 scandal, Freemasonry has attracted unscrupulous men from the same kind of professional background as the honest Masons. Many of the unscrupulous new arrivals get bored and go elsewhere when they realize what honest Masons actually do. But within the confused world of Calabrian Freemasonry, there are plenty of niches where clusters of them can find a base. Most of the Lodges cited in the judges’ ruling in the Gotha Trial are the kind of ‘covert’ or ‘irregular’ Lodges not authorized by the main national orders. They act like dating agencies, matching ’Ndranghetisti  to mediators from among the professional classes, and can offer a route to the very top of the grey zone where the criminal underworld meets the upper world of politics and business. But regular Lodges are at risk too: by accepting a banal favor from a Brother secretly in league with the ’Ndranghetisti , even an honest Mason can be drawn into a web of blackmail.

If the ruling of the trial that starts tomorrow is right, then there is an obvious way that the interests of Freemasonry could be harmonized with the fight against the mafia. The main Masonic orders could seek the help of the law in policing the boundary between regular and irregular forms of Masonry. Alas, no such approach will be adopted any time soon. There are too few people on either side who have an interest in collaboration. Masonry and anti-Masonry seem doomed to carry on their centuries-old slanging match.

Prosecutor Nicola Gratteri (pictured in the center below) acknowledges that Wednesday’s trial, which is expected to last a year, will not kill off the crime empire, but he hopes it will mark an important step towards its demise by encouraging victims to come forward and denounce the mobsters. 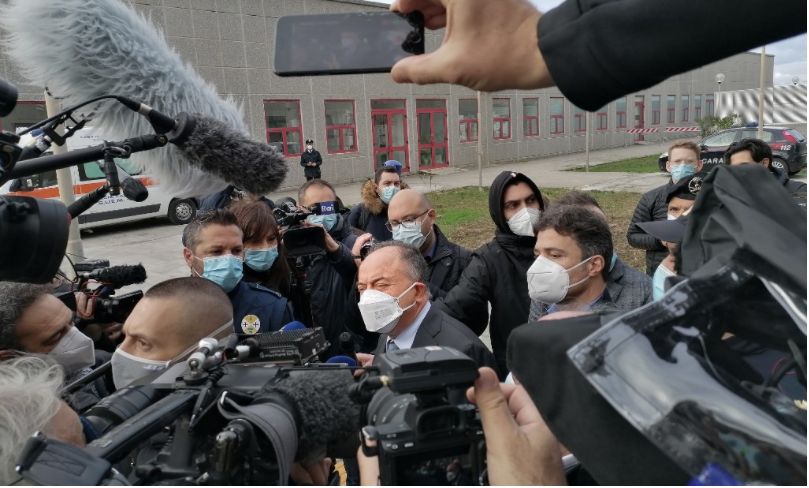 “It will open the path to yet more trials and allow us to make even deeper inroads into the group. I want people to believe in us and begin to collaborate and have ever great trust in us,” he said.