Yesterday a monument of Albert Pike was removed in Wahington D.C. The statue was erected by the Scottish Rite of Freemasonry and depicted Pike on a granite pedestal, which features the allegorical Goddess of Masonry, who holds the banner of the Scottish Rite. The latter successfully lobbied Congress to grant them land for the statue as long as Pike would be depicted in civilian, not military, clothing.

Pike’s body is interred at the D.C. headquarters of the Scottish Rite of Freemasonry, which also contains a small museum in his honor.

It is no secret that Albert Pike's Scottish Rite today is the largest Masonic body in the world. Yet although it claims its origins would go back to the unlikely King Frederick it more factually received its inspiration from a French Rite of Perfection that originated with Étienne Morin thus aptly named the "Morin effect" by André Kervella.

In 1761, Etienne Morin was appointed as "Grand Inspector to all parts of the New World." He was sent forth to spread the degrees around. In 1763, Morin formed a 25-degree Rite of Perfection in St. Domingo in the West Indies, and it was from here that Scottish Rite Masonry truly began to spread around the world. Four years later, Morin's friend Henry Francken of Jamaica exported the degrees to New York, and in 1783 Isaac De Costa started a Rite of Perfection in Charleston, South Carolina.

Of course, there are also still discussions as to where and when John Mitchell and Joseph Cerneau received their 33rd degrees.

In the case of Cerneau, he is usually dismissed quickly due to the total lack of evidence that anyone ever actually gave him the 33º. Emanuel de la Motta, upon first meeting Cerneau, attempted to obtain certain information about Cerneau's 33º including having a look at his Patent but was unable to satisfy himself in any way.1

But what of John Mitchell? There has never been a Patent discovered showing that Mitchell received the 33º from anyone. We know that Mitchell gave Dalcho the 33º as a Patent for this event exists. Mitchell was the first Sovereign Grand Commander of the SJ, so how did he receive the 33º? Who gave it to him? Before Mitchell's role in the creation of the AASR, he was a Deputy Inspector General (25º) of the so-called "Rite of Perfection." We often see those senior to Mitchell in this system being credited with giving him the 33º (usually Barend Spitzer). How could a 25º Mason from the "Rite of Perfection" give the 33º of the AASR to someone? They are two different systems and two separate degrees. Logic must come into play at some point. We can also see an account of some "unknown" Prussian or German giving him the degree with Mitchell signing an obligation for it in French.2 If someone gave Mitchell the 33º, who gave it to him? Why didn't this unknown SGIG play a role in the creation of the Charleston Council? Since this unknown SGIG was senior to Mitchell, why wasn't he the first Charleston Sovereign Grand Commander?

One suggestion is, according to Henry Wilson Coil, and Albert Pike that a Deputy Inspector General of the old so-called "Rite of Perfection" (as were both Mitchell and Cerneau) could "slide over" to the 32º of the new 33 degrees AASR. Also, if a 32º of the AASR was the senior (or only) 32º in an unoccupied area, he could advance himself to (or assume) the 33º of the AASR to give the degree to others and create a Supreme Council. Both Mitchell and Cerneau gave the 33º to others and created supreme councils. Regardless of the historic disapproval of Cerneau, it is possible that according to the custom of that time, he received the 33º in the same manner as did Mitchell. And if so sound argument could be made that he was just as legitimate an SGIG as was Mitchell.

A good question, of course, is also how did Freemasonry start to begin with?

What we generally know is that, although this is often claimed, Freemasonry most likely was not a transition out of 'operative freemasonry'; and that the adjective' speculative' generally referred to occult activity.

For example the earliest English Masonic catechism, in answer to the question, "How high is your Lodge?" gives the answer, "It reaches to the heavens". The Lodge thus seemed to be an imaginative projection, 'conjured up' by its members to embody a center of the universe.

Another example is that one of the earliest known Freemasons Elias Ashmole, was an admirer of John Dee, and Ashmole himself studied astrology and alchemy. That early on Masonic iconography circulated in this kind of circles seems indicated by on the left an alchemical drawing from Jamsthaler, Victorium spagyricum, 1625 clearly showing compass and square almost 100 years before Freemasonry would. And on the right the famous two pillars as present in all Masonic lodges today, however this time as the front cover of John Dee’s 1564; Monas Hieroglyphica. 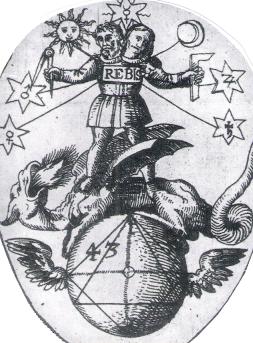 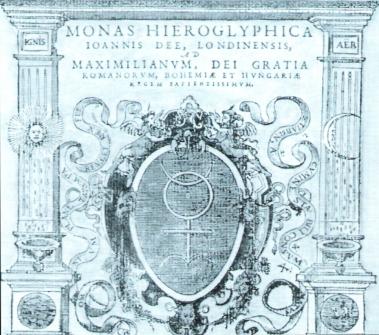 While during the time of Ashmole mentioned above, there were no degrees at all in Freemasonry. Also, the third of the first three, was a late development. The first minute of the working of the third degree comes not from a lodge but the minute book of the Philo Musicae et Architecturae Societas Apoloni, the Apollonian Society for the Lover of Music and Architecture. Or at best an irregular lodge that, according to Albert G. Mackey, was formed in 1725, meaning eight years before the official British first Grand Lodge in London in 1717.

In fact, following the foundation of the Grand Lodge of England that has its origins in 1717 in the course of time various Masonic bodies appeared many of whom did not survive.

But essential elements of the modern myth that is evidenced in the Scottish Rite were created when a nostalgic view of the chivalric codes of the Middle Ages was fashionable and which culminated in not only physical displays of chivalry.

History and legend concerning the historical Knights Templar also play an important role in the degrees of the Ancient and Accepted Scottish Rite of Freemasonry, notably in the Rite's 30th Degree, Knight Kadosh. Other Scottish Rite degrees sometimes styled "Templar Degrees" include the 28th Degree (Knight Commander of the Temple, formerly denominated the 27th Degree in the Southern Jurisdiction of United States), the 29th Degree (Scottish Knight of Saint Andrew), the 32nd Degree (Master of the Royal Secret), and the 33rd Degree (Inspector General). 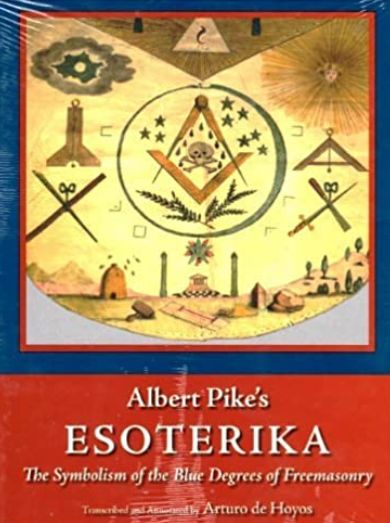 The later Ancient and Accepted Scottish Rite of Freemasonry then particularly captivated its members by staging their fraternal ceremonies, moving portions of their ritual from the lodge room floor to the elevated stage.

But while it generally is claimed that the initial organization of the 33-degree AASR was created in 1801 their history books have not proven any of this by their own accounts.

It is clear however that Albert Pike was elected an active member (Sovereign Grand Inspector General) of Southern Jurisdiction on 20 March 1858.

Allegations of racism have often been made about Pike over the years, yet he was a per­sonal friend of Thornton A. Jackson, Supreme Grand Commander of the Prince Hall Southern Jurisdiction's Supreme Council. In fact, Pike presented Jackson with a complete set of his rituals for use by the Prince Hall Scottish Rite.

Pike was a man of his era. He spent years living in the South and was a Civil War general on the Confederate side. He owned several household slaves in Little Rock, but he personally disliked the institution of slavery. The separation of the races was a way of life in the North and the South, and the concept of parallel groups for blacks and whites was the accepted norm before and after the Civil War. Pike had no inter­est in integrating Freemasonry, but he had no qualms about sharing Masonic knowledge with black Masons.

Many anti-Masons have attempted to connect Pike with the early days of the Ku Klux Klan. However, there is no authentic evidence that Pike was involved with the KKK.

Anti-Masons have used Pike’s writings in Morals and Dogma almost from the beginning as something with which to beat Freemasons over the head, always plucking isolated passages from it and selectively leaving out critical words and even whole sentences from quotes. Whereby in general here Pike was again a child of his time he read and quoted from what was available at the time, and just like I question about what I above termed the King Frederick myth, one will also find many other myths in the occult and Masonic literature of that time, not to mention even today.