Qigong (Chi Kung) is a product of the twentieth century, but is rooted in the earlier tra­dition. The term qi (pneuma, breath) is mentioned in the Chinese Tang (618- 907) and Song (960-1127) period. In modern times, it has taken on a new meaning and refers not only to Nourishing Life (yangsheng) but also to martial and therapeutic techniques.

The idea of "nourishing" (yang) is commen in Chinese thought: one can nourish life (yangsheng), the inner nature (yangxing), the body (yangxing), the whole person (yangshen), the will (yangzhi), and the mind (yangxin). The term yangsheng designates techniques based on the essence, the inner or outer breath, and the spiritual force (jing, qi, shen); these techniques are grounded on physiological, psychological, and behav­ioral principles and include gymnastics (daoyin), massage, breathing (fuqi, xingqi), sexual hygiene (fangzhong shu), diets (bigu), healing, visualizations , and rules of daily behavior. One of the earliest documents where similar practices are mentioned is in the Mawangdui manuscripts dating to about 200 BCE. Discovered in 1973.

The term qigong however, signifies both "practice" and "efficiency" of qi, it can embrace all types of techniques, both traditional and modern.

Depending on the doctrinal and social context of these practices, historians currently divide qigong into six branches: a Taoist qigong, a Buddhist qigong, a Confucian qigong, a medical qigong, a martial qigong, and a popular qigong (including the methods of rural exorcists and sorcerers). According to the features of the practice, they also distinguish between a "strong qigong" (ying qigong), incorporating martial techniques, and a "soft qigong" (ruan qigong). The latter is further divided into two groups:

1. Jinggong, or the practice of qi in rest, which traditionally was called "sitting in oblivion" (zuowang) by Taoists, "sitting in dhyana" (chanzuo) by Buddhists, and "quiet sitting" (jingzuo) by Neo-Confucians. These sitting practices can be accompanied by breathing, visualization, and mental concentration.

2.Donggong, or the practice of qi in movement, which includes the gymnastic traditions (daoyin) of medical doctors, Taoists, and Buddhists. The induction of spontaneous movements (zifa donggong) is derived from traditional trance techniques (Despeux 1997).

New practices essentially created in the 1980s were much debated and criticized by traditional religious personalities, qigong followers, and authori­ties. Certain practices, such as the "Soaring Crane form" (hexiang zhuang), lead to spontaneous movements that were said to cause illness, probably because of their close connection with trance states. Some techniques that emphasize collective practices and promote the establishment of a so-called "area of qi" (qichang) to increase efficiency were also strongly criticized; for instance, the method taught by Yan Xin , a master who organized collective qigong sessions in stadiums with a capacity of up to about ten thousand, was very popular but aroused suspicion among the authorities. As for the therapeutic technique of the qigong master who heals people at a distance through his energy or his hands-a method that actually revives the traditional Taoist practice of "spreading breath" (buqi)-the possible exis­tence of an "outer energy" (waiqi ) and its efficacy have been debated at length.

Official qigong institutions appeared in the 1950s and 1960s and were at first exclusively concerned with therapeutics. One of the main qigong promoters at the time was Liu Guizhen (1920-83). A mend of Mao Zedong, he returned to his village after developing a stomach ulcer and practiced breath­ing and meditation exercises under a Taoist master. Later he created a new method called "practice of inner nourishment" (neiyang gong) and founded qigong therapy institutes in Tangshan mill (Hebei) in 1954 and in Beidaihe (Hebei) in 1956. These institutes were destroyed during the Cultural Revolution, and then partly reconstructed after 1980 when qigong flourished again.

From that time, qigong began to invade the town parks where masters and followers practice in the morning. Some religious personalities who described themselves as "qigong masters" felt encouraged to revive forgotten or little ­known practices, or to create new techniques based on the traditional ones. Qigong had both enthusiasts and critics among the authorities. Although its therapeutic function was always essential, certain officials wanted to move qigong beyond the realm of individual practice and propound it to the masses and to society, even to the state, because they saw in it economic advantages and the possibility of asserting the specific identity of China, its power and its modernity, Qigong was taught in schools and universities and became the object of international congresses and scientific research, and numerous specialized journals and books were published on the subject. Other officials viewed it as charlatanism and superstition, and mistrusted the subversive potential of certain movements. An example is the Falun gong (Practices of the Wheel of the Law), a form of qigong allegedly rooted in the Buddhist tradition, which in 1999 organized demonstrations in Beijing and other Chinese cities and was outlawed shortly afterward.

What we euphemistically refer to as “the Politics of Qigong” thus is when qigong entered the political arena.

An early example of this was Taiping dao (or Way of Great Peace) rebel­lion, organized in 184. Also called the Yellow Turban rebellion, it represented a critical factor in the fall of the Han dynasty and was one of the movements that contributed to the milieu from which Taoist religion arose. It is presumed that they used the Taipingjing (one of the earliest Taoist scriptures) as central text and inspiration. (Benjamin Penny in, The Encyclopedia of Taoism, 2008, p.1156.)

The doctrine of the Taiping jing is based on the idea, already present in Warring States texts, that an era of Great Peace (taiping) will descend on the empire if its governance is based on returning to the Dao.

The slogan used by the Yellow Turbans was, "The Blue Heaven (qingtian) is already dead, the Yellow Heaven (huangtian) will replace it." This is often read in political terms as conforming to the movement of the five elemental phases (wuxing). As each phase was accorded a color, the cycle of dynasties was seen to follow a cycle of colors. Since the Han ruled under the phase of Fire, the subsequent dynasty had to rule under Soil, and the color attributed to Soil was yellow. Thus, the idea that the Yellow Heaven was about to be established signaled the movement's revolutionary intentions. However, for this reading to be consistent the Yellow Turbans should really have referred to the demise of the Red Heaven, the color adopted by the Han. It is the idea that the Yellow Heaven presaged the new society of Great Peace led to the adoption of the yellow headscarves (huangjin turbans is the traditional rendering) that gave rise to their name. Other examples of politicized notions of yangsheng or qigong, follow underneath.

Like the various forms of  yoga, qigong and Chinese (inner) Alchemy, exist of various extremely detailed spiritual practices and belief system that are not a religion itself yet can be found to be incorporated into many different religious traditions as well as into non-religious traditions such as medicine, martial arts, and secular scientific inquiry. The Politics of Qigong in Modern China P.1.

In 2006, the Chinese Government ordered the closure of Bingdian Weekly because the weekly argued that “official textbooks inaccurately depicted the 1900 Boxer Rebellion, a nationalist uprising” in which thousands of Chinese Christians and many foreigners were killed. Not surprising, in the same article the WSJ also concluded,” Beijing ’s anxiety over a news media that is increasingly driven by market forces and a burgeoning sense of professionalism, rather than official propaganda directives. Authorities have jailed several Chinese journalists in the past two years and moved to tone down feistier publications.” (WSJ, China Shuts Down Outspoken Publication, January 25, 2006 9:13 a.m.) P.2: The Celestial and Terrestrial Spirits of Qigong: 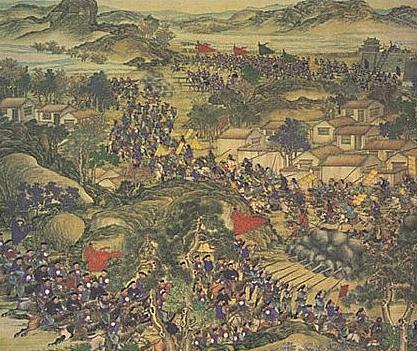 TheTaiping Rebellion. It began in South West China with the visions of a millen­arian prophet. Politics of Qigong P.4.

Politics of Qigong P.5: End of Taiping, Burying the Dead.

Politics of Qigong P.7: Chinese security officials did not expect the sudden appearance of the Falun Gong, whose members surrounded government offices in Beijing, though the organization had operated as a legal entity registered under Chinese regulations. Falun Gong.