An article in today's British Guardian newspaper asks; Could Donald Trump refuse to accept defeat in the US presidential election? adding that Trump has repeatedly refused to commit to a peaceful transition of power – uncertainty over the result will put that to the test.

Some go even a step further and claims to reveal secret 'war game' planning amid fears of a legal challenge after November's election.

Or as Quint claims this could spark a situation where the US House of Representatives and the Senate become involved in trying to declare a result. The matter could also reach the Supreme Court, and some federal politicians and state governments could join in along the way, says ABC News, predicting a “highly fluid situation” ie, uncertainty. 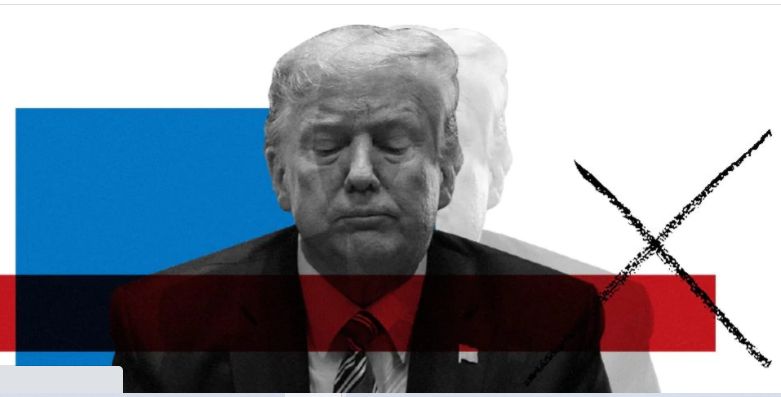 The peaceful transfer of power through elections is a defining feature of democracy. After votes are freely cast and fairly counted, the losing candidate or party accepts the results as legitimate and concedes to the winner. The United States has a long tradition of public presidential concessions dating back to William Jennings Bryan’s congratulatory telegram to William McKinley after the 1896 election. Al Gore disputed the outcome of the 2000 election, but after the Supreme Court ruled to halt a recount in Florida, he conceded defeat.

U.S. President Donald Trump has threatened to upend this tradition. A reporter asked him in September whether he would commit to a peaceful transfer of power after this month’s election. Replied the president: “We’re going to have to see what happens.”

A disputed presidential election would take the United States into uncharted territory. Around the world, however, losing presidential candidates refuse to accept electoral results on a fairly regular basis. Out of 178 elections in presidential democracies between 1974 and 2012, 38—or 21 percent—were disputed by runner-up candidates or parties. Disputed elections have set off violent unrest, constitutional crises, and even civil wars. Given the enormous potential risks, why are losing presidential candidates so often willing to brush aside democratic tradition and reject unfavorable electoral outcomes?

According to studies by the political scientist's Todd Eisenstadt and Andreas Schedler, losing candidates often refuse to concede because they seek to publicize flaws in an electoral system and thereby to press for reforms. They may hope to overcome information asymmetries that allow incumbents to commit electoral fraud, for example, and therefore push for independent election commissions.

Such motives often lie behind electoral disputes in authoritarian or semi-authoritarian countries, where sham elections can be little more than coronation exercises. But disputes are common in presidential democracies, too—even when independent observers have certified election results as free and fair. Those who challenge election results under such circumstances likely aim for something other than electoral reform.

However, in these cases, the objective is to build political leverage. Losers reject unfavorable election outcomes in order to strengthen their post-election bargaining positions and extract political concessions from the winners. I call this the “blackmail strategy” of losing parties and candidates: losers threaten to upend post-election stability unless they receive benefits, such as cabinet appointments, parliamentary leadership positions, or passage of their party’s legislative priorities. In fact, research shows that a losing presidential candidate is especially likely to contest the outcome if his or her political party does not have a majority in the lower house of parliament—and that the probability of a disputed result increases as the losing party’s share of seats in parliament decreases.

Take, for example, the 2009 presidential election in Indonesia, which international observers generally agreed was free and fair. Opposition leader Megawati Sukarnoputri lost by a margin of more than 34 percent, a figure that matched the parallel counts of independent polling institutes, and her Democratic Party of Struggle won less than 17 percent of the seats in parliament. Megawati nonetheless rejected the outcome and challenged the results before the constitutional court. While the case was pending, her party engaged in closed-door negotiations with the winning candidate, President Susilo Bambang Yudhoyono, and managed to obtain his support for the election of Megawati’s husband as speaker of parliament, among other concessions. The constitutional court eventually dismissed Megawati’s challenge and upheld the election results, but by then her party had secured electoral benefits it would not otherwise have achieved.

For example, between 1974 and 2012, losing presidential candidates whose parties were in the minority in parliament showed a greater tendency to dispute electoral results. They did so no matter whether their system used direct popular elections or an electoral college. Where there were differences, they accorded with the system for electing not the president but the parliament. Parties that lost presidential elections in countries with proportional representation in parliament were likelier to accept unfavorable results than were those in countries with first-past-the-post parliamentary elections, in which winners take all and political power is more concentrated.

One might expect these findings to have greater relevance to weak or recently established democracies, where norms that push losers to graciously accept defeat are not deeply rooted. But that is not the case. Even established democracies with long-standing traditions are vulnerable to electoral disputes when presidential elections are close, there are at least some irregularities, or the losing party also stands to lose in parliament.

This finding ought to serve as a warning to those who believe that their country’s long tradition of peaceful, democratic transfers of power will dissuade Trump from rejecting election results that do not favor him. On the contrary, the table is set for the electoral blackmail strategy. Not only is the election likely to come down to a few close swing states, but Trump has already seized on the issue of mail-in ballots, claiming without evidence that there are “problems and discrepancies” with this method of voting. Moreover, the president’s party is likely to remain in the minority in the House of Representatives and could even lose control of the Senate. Both houses use first-past-the-post electoral systems. In other words, there is reason to fear that the president or members of his party might hold the country’s political stability hostage in an attempt to extract concessions from the Democrats.

What might Trump squeeze out of his opponents through such a stunt? After all, it is difficult to imagine a President Joe Biden appointing Trump’s allies to his cabinet. One possibility would be a commitment from the Democrats to refrain from packing the Supreme Court in response to Justice Amy Coney Barrett’s rushed appointment. Such a concession would preserve an important part of Trump’s legacy and ensure that the court remains ideologically conservative for years to come. Republicans might also seek to lock in any number of regulatory or policy changes from the Trump era. Even if the president’s primary motivation for rejecting a loss at the polls is to preserve his image as a winner, those around him could aid and abet his abrogation of democratic norms in order to advance their aims or the aims of the Republican Party.

The United States has a long tradition of peaceful and democratic transfers of power, but it is not immune to electoral blackmail. If Trump loses, he may opt for the same self-serving playbook that 21 percent of losing presidential candidates have followed over the last four decades, sacrificing the country’s political stability for his own political gain.

And in the unlikely event that Trump, still refusing to accept his loss despite Biden having been ruled the victor, barricades himself inside the White House and physically will not leave office, it’s not immediately clear who would be in charge of removing him.

Biden, back in June, said the military would remove the by-now-former president. He told the Daily Show: “I promise you, I’m absolutely convinced they will escort him from the White House with great dispatch.”

The military seems to have other ideas, however.

Gen Mark Milley, the chairman of the joint chief of staff and the country’s top military officer, has said service members would not get involved in the transfer of power. “In the event of a dispute over some aspect of the elections, by law US courts and the US Congress are required to resolve any disputes, not the US Military,” Milley said. “We will not turn our backs on the constitution of the United States.”

Clearly, Trump would be removed somehow – at some point he surely would have to leave of his own accord, but Americans will be hoping this hypothetical does not come to pass.

As Trump likes to say: “We’ll see what happens.”