The growing trend of Vaccine Nationalism

Today the World Health Organization has warned against “vaccine nationalism”, cautioning richer countries that if they keep treatments to themselves they cannot expect to remain safe if poor nations remain exposed.

As global cases of Covid-19 passed 19 million on Friday, WHO chief Tedros Adhanom Ghebreyesus said it would be in the interest of wealthier nations to help every country protect itself against the disease.

“Vaccine nationalism is not good, it will not help us,” Tedros told the Aspen Security Forum in the United States, via video-link from the WHO’s headquarters in Geneva.

“For the world to recover faster, it has to recover together, because it’s a globalized world: the economies are intertwined. Part of the world or a few countries cannot be a safe haven and recover.

“The damage from Covid-19 could be less when those countries who... have the funding commit to this.”

Several countries are racing to find a vaccine for coronavirus, which has killed more than 700,000 people globally.

There was some good news as of late, this according to the recent  Novavax results. However it is no secret that Scientists fear that the current pandemic could lead to a geopolitical fight over vaccines. And that ‘vaccine nationalism’ threatens global plan to distribute COVID-19 shots fairly.

The race to develop an inoculation against Covid-19, involving vaccine developers in more than 30 countries, entails cross-border collaboration but also high-stakes competition. Some countries are using their research dollars to try to buy the first place in line for supplies in the event an experimental vaccine proves effective. Public health specialists warn that such vaccine nationalism could result in the pandemic lasting longer, by preventing the most efficient allocation of shots to prevent Covid-19.

The drug companies find themselves caught in the middle. While eager to bring products to market as quickly as possible, they face risks in moving too quickly in order to fit certain agenda's like for example the US  election calendar

As part of its Operation Warp Speed aimed at advancing the development of coronavirus countermeasures, the U.S. has committed billions of dollars of support to vaccine companies, with the priority being protecting American citizens first. Officials have placed advance orders for hundreds of millions of doses of vaccines, in the event they prove effective, with the aim to deliver sufficient supply to cover the U.S. population by January 2021. The approach is in keeping with the U.S. government’s purchase of 500,000 doses of the Covid-19 treatment remdesivir, which is all of the manufacturer’s production for July and 90% for August and September. 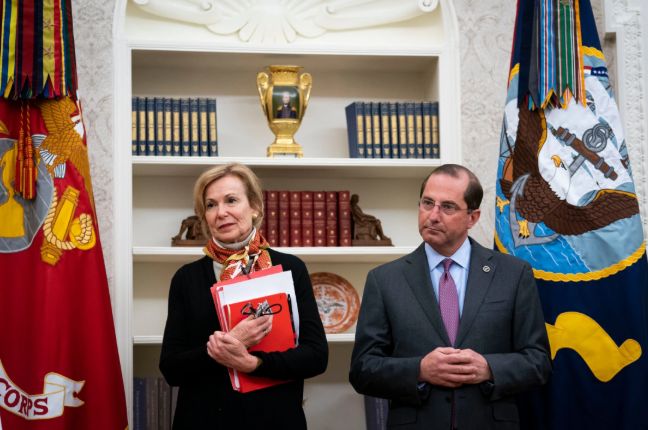 It escaped no one that the proposed deadline of Operation Warp Speed also intersected nicely with President Trump’s need to curb the virus before the election in November.

The ensuing race for a vaccine, in the middle of a campaign in which the president’s handling of the pandemic is the key issue after he has spent his time in office undermining science and the expertise of the federal bureaucracy, is now testing the system set up to ensure safe and effective drugs to a degree never before seen.

Under constant pressure from a White House anxious for good news and a public desperate for a silver bullet to end the crisis, the government’s researchers are fearful of political intervention in the coming months and are struggling to ensure that the government maintains the right balance between speed and rigorous regulation, according to interviews with administration officials, federal scientists and outside experts. 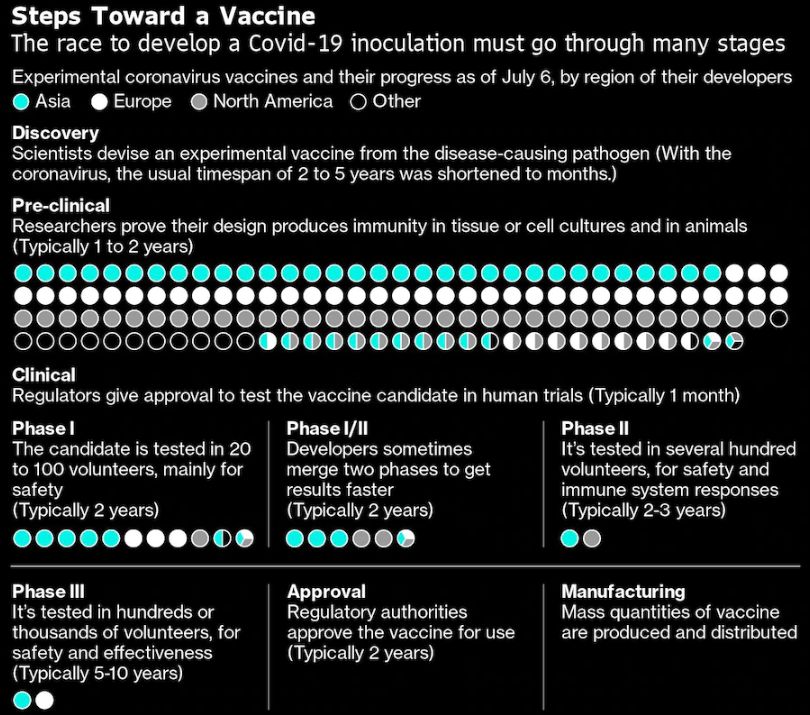 Who besides the U.S.?

The U.K. has already secured the highest number of potential Covid-19 vaccine doses per capita, ahead of the U.S., having signed a deal with GlaxoSmithKline Plc and Sanofi for as many as 60 million doses. The Serum Institute in India is developing one of the leading Covid-19 vaccine candidates, and its owner has signaled that most of the initial supply of a successful shot would be distributed within India. Japan is trying to lock up supplies, having made a deal with Pfizer Inc. and BioNTech SE for 120 million doses of the vaccine they’re developing. Germany, France, Italy and the Netherlands have signed an initial contract for pre-orders of 300 million vaccine doses with AstraZeneca that would be available to all members of the European Union.

Can vaccine nationalists guarantee first access to a vaccine?

That depends. What may prove more important than who has invested in a vaccine is where it is manufactured. Pharmaceutical companies are preparing for the possibility that the governments in control of manufacturing locations will demand sufficient doses to cover their population before allowing exports. This would hardly be unprecedented. This year, under the pressure of the pandemic, more than 90 states and territories have placed export curbs on medicines and medical supplies. Anticipating export bans, vaccine developers are working to build parallel manufacturing facilities in multiple countries, but it’s an expensive endeavor with large financial risks, given that the vast majority of experimental vaccines don’t pan out. In its agreements to fund vaccine developers, the U.S. government has mostly negotiated manufacturing within the U.S.

Three groups -- the World Health Organization; the Coalition for Epidemic Preparedness Innovations, which works to advance new vaccines, and Gavi, a global non-profit group focused on vaccine delivery -- have set up a program aimed at distributing successful vaccines equitably around the world. Called the Covid-19 Vaccines Global Access Facility (Covax), it calls on higher income countries to invest $18 billion in about 12 experimental vaccines and ensure that early access is shared around the globe when doses become available. The intended appeal to rich countries is that the facility spreads their bets across a variety of potential vaccines, any of which individually is likely to fail. China’s President Xi Jinping has pledged to make any effective vaccine against the coronavirus that is developed by China, a frontrunner in the effort, accessible and affordable globally as a “public good.”

What are the prospects for those approaches?

More than 70 countries have indicated an interest in joining Covax, though none have formally done so. The plan calls for donor countries to commit by the end of August and provide an advance of 15% of the $18 billion. The U.S., India and Russia have declined to participate. One issue around China’s pledge to share any vaccine it develops is quality assurance. A 2018 scandal that uncovered instances of Chinese vaccine-makers cutting corners in production has given its industry a bad global reputation. After the incident, Beijing passed new laws carrying hefty fines to police the industry.

Countries taking an “every nation for itself“ approach are likely to reduce vaccine access for other countries and drive up prices, leaving poorer nations especially in the lurch. The concern is that the world will see a repeat of the situation in the last pandemic, when rich nations purchased all the available supply of vaccines against the H1N1 flu virus in 2009-10. Who gets access to vaccines and how much they are willing to pay will have consequences for international relations in coming years, with vaccines potentially becoming leverage in political disputes. Beyond that, global health experts say, the pandemic will be controlled fastest if a future vaccine is deployed in the most efficient way possible -- with the first doses going to groups around the world that are at the highest risk, such as medical workers, nursing home staffers and the elderly, rather than to whole populations in the richest countries.