The word Tantrism assuredly is a western creation. India traditionally knows only texts called tantras. Also as André Padoux has ponted out twenty years ago, the category "Tantrism"-as a singular, coherent entity-is itself a relatively recent invention, in large part the product of nineteenth-century scholarship, with a tangled and labyrinthine history. When it was first discovered by Orientalist scholars and missionaries in the eighteenth century, Tantra was quickly singled out as the most horrifying and degenerate aspect of the Indian mind. Identified as the extreme example of all the polytheism and licentiousness believed to have corrupted Hinduism, Tantra was something "too abominable to enter the ears of man and impossible to reveal to a Christian public," or simply "an array of magic rites drawn from the most ig­norant and stupid classes." Yet in our own generation, Tantra has been praised as "a cult of ecstasy, focused on a vision of cosmic sexuality," and as a much needed celebration of the body, sexuality, and material existence. (André Padoux, "A Survey of Tantric Hinduism for the Historian of Religions," review of Hindu Tantrism, by Sanjukta Gupta, Teun Goudriaan, and Dirk Jan Hoens, History of Religions 20, no. 4 [11981]: 3 50). See also Padoux, Vdc: The Concept of the Word in Selected Hindu Tantras,1990, pp. 31 ff.)

This ambivalence has grown even more intense in our own day. On the one hand, the scholarly literature often laments that Tantra has been woefully neglected in the study of Asian religions as ‘the unwanted stepchild of Hindu studies.’ On the other, as we see in endless publications, bearing titles like Tantric Secrets o f Sex and Spirit or Ecstatica: Hypno Trance Love Dance, Tantra has become among the most marketable aspects of the ‘exotic Orient.’ And like sex itself, Tantra has become the subject of an endless proliferation of discourse and exploited as a “secret."

Various authors use the terms Tantra, Tantrism, and Tantracism more or less interchangeably to refer to this category of Asian religions. Thus when I mention ‘Tantrismit’ or ‘Tantra,’it is to refer to the category as it has been constructed as a particular "ism", and more particular I will go on by detailing at least one aspect today; the four, ‘Chakra’s’.

Kathleen Taylor has argued persuasively that Arthur Avalon is not simply a pseudonym assumed by Woodroffe for his Tantric publications; rather, Avalon is actually the joint persona of Woodroffe (who knew little Sanskrit) and the Bengali translator with whom he collaborated ("Arthur Avalon: The Creation of a Legendary Orientalist," in Myth and Mythmaking, ed. Julia Leslie [Richmond, Eng.: Curzon Press, 1996], pp. 151-61); see also her paper "Arthur Avalon among the Orientalists: Sir John Woodroffe and Tantra" (paper presented at Oxford Uni­versity, zoos); and her book, Sir John Woodro f fe, Tantra, and Bengal: An In­dian Soul in a European Body"? (Richmond, Eng.: Curzon Press, 2oo1).

As Kathleen Taylor summarizes Woodroffe's remarkable, somewhat schizoid persona, he seems to have maintained two separate identities: "One identity is public, British and official: the judge, the schol­arly Orientalist.... The other is secret, Indian and Tantric."

As Taylor argued, it seems fairly clear Woodroffe was involved with a circle of disciples who had gathered around a popular Tantric teacher named Siva Candra Vidyârnarva Bhattâcârya. Originally from East Bengal, Siva Candra attracted a number of educated bhadraloks in Calcutta, along with a few interested Westerners, one of whom was John Woodroffe. Although Woodroffe never acknowledged any direct participation in Tantra, many believe that he was initiated by Siva Candra; in fact, an account of this initiation was published  in the 1960’s.( Vasanta Kumar Pal, "Tantracarya Sivacandra," Himadri ,Agrahayan 1372 Bengali era, Paus 1373 Bengali era ,1965-66.)

And as Taylor has argued Arthur Avalon rather than Woodroffe alone, could more likely see to be comprised of both Woodroffe and his Bengali friend Atal Behari Ghose,. In fact, some Indian linguists have asserted that Woodroffe could not even read the script accurately.

But when Tantra had begun to emerge in the early twentieth century as something scandalous, shocking, and yet also terribly interesting, it didn't burst into popular culture as a full-blown "cult of ecstasy" or "yoga of sex" until the sexual revolution of the 1960’s. Now mingled with the erotica of the Kâma Sûtra, Pierre Bernard's sex scandals, and the magick of Aleister Crowley, the Great Beast 666, Tantra fit in nicely.

Thus, in 1964, we see the publication of Omar Garrison's widely read Tantra: The Yoga o f Sex, which advocates Tantric techniques as the surest means to achieve extended orgasm and optimal sexual pleasure: "Through  the principles of Tantra Yoga, man can achieve the sexual potency which enables him to extend the ecstasy crowning sexual union for an hour or more, rather than the brief seconds he now knows." Fighting against the repressive prudery of Christianity, which has for centuries "equated sex with sin," Garrison sees in Tantra a much needed cure for the Western world, bearing with it "the discovery that sexual union can open the way to a new dimension in life" (Garrison, Tantra, 1964, pp. xxviii, xxvi).

Not surprising today in areas heavily frequented by Western tourists, such as Rishikesh and Târâpith in India, every third sâdhu (holy man) or so invites a young Westerner over to smoke hashish and learn about Tantra.

Thus in one of the better books on the subject David Gordon White writes:” Standing near the top of the stairs leading down to the churning brown waters of the Ganges, I spied a late­middle-aged man with a longish graying beard and a loincloth, seated in what appeared to be a meditative pose. I approached him and, summoning up my best Hindi, asked him if he was a renouncer (sannyâsin), and if he was, what could he tell me about Tantra? His reply was in English: he was a businessman from Bengal who, having had all his belongings stolen from him on a train a month before, had alighted at Benares to take a break from his work. He had family in the neighborhood and enjoyed spending his afternoons on Kedar Ghat. As for Tantra, he didn't practice it, and in any case, all that was worth knowing on the topic could be found in the books of Arthur Avalon” (White, Kiss  of the Yogini, 2003,p. xi).

When the Disney Corporation makes an animated film about Pocahontas p. 1 and 2, it does not make any claim to historical accuracy; it is simply selling a product for its "feel-good" entertainment value. This is what the "Tantric sex" business is doing, with the important difference that it does in fact make the implicit and bogus claim -by its abusive appropriation of the adjective "Tantric"- that it is reproducing a body of practice with an Indian historical pedigree which does not exist.

A crucial strategy in transforming the unfamiliar and exotic into yet another building block of a New Age worldview is source amnesia: the propensity to gloss over or be unaware of the fact that processes of reinterpretation have taken place. A reduction of complex doctrines to a few building blocks, the extensive search for more or less spurious parallels or the application of various speculative hermeneutics to myths would hardly work if one were acutely aware of the Procrustean tactics used in each of these cases.

This was also recognizable in the writings of  who before Arthur Avalon/ Woodroffe even, was foremost is responsible for  the  popularization  the “Chakra’s” in the Western world, Charles Leadbeater(in The Inner Life, 1910) where he literally re-constructed such ideas and proposed in line with Theosophical teaching stemming back to Madame Blavatsky a specific number of  seven, Chakra’s. In his 1910 book section 5, Leadbeater thus makes reference to a correspondence between seven chakras, seven colors and seven notes of the musical scale.

But Leadbeater went further and in his ambition to start his own ‘Christian’ Church when  on the front cover of his 1928 book now directly titled “The Chakra’s” he attempts to demonstrate the analogies between his own theory of the chakras and the Christian theosophy propounded by Johann Georg Gichtel, editor of Jakob Böhme's writings.

On the cover of Leadbeater's book The Chakras, one finds one of Gichtel's illustrations, originally published in 1696, in which circles and astrological signs have been placed on a male figure. In the navel, Gichtel has placed the moon. The left and right sides of the abdomen are the seats of Mercury and Venus, respectively. The heart is the organ of the sun, while the chest houses Mars. The sign for Jupiter is placed on the forehead, while Saturn adorns the crown.

Analogical reasoning presents problems once one recognizes that there are considerable divergences as well as similarities. Gichtel's astrological worldview is hardly the reflex of a universal insight into the human chakra system. An interpretation of Gichtel's illustration based on etic history rather than emic pattern recognition will more likely show the influence of an idea developed by Gichtel's main source of inspiration, Jakob Böhme. Böhme tried to construct a traditional, hermetic system of correspondences between man, the microcosm, and the planetary system, the macrocosm, and did so from within a heliocentric picture of the world. Whereas the chakra system of the Tantric yogi consists of a vertical hierarchy, Böhme's and Gichtel's systems are built on a near-symmetrical schema, of which man's heart constitutes the center, and within which the sun is lodged as a symbol of vital force and spiritual light: 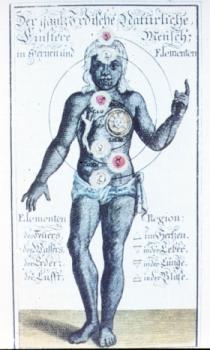 The “seven rays” also popularized by groups like the “I Am” movement plus one of the most influential author of New Age religiosity  in the 1930’s Alice Bailey, whose intricate system looked as follows:

Yet original Indian Tantric texts from the eight century where these concepts first appeared knew only of “four” cakras, wheels or ‘centers’, that are identified with four geographical sites (pithas). These in fact correspond to points of contact between the Indian subcontinent and inner Asia: these are Kâmakhyâ (Gauhati, Assam), Uddiyâna (Swat Valley?), Purnagiri (Punjab?), and Jâlandhara (upper Punjab). This tradition is repeated in numerous sources, including those of the Nâth Siddhas, founded Goraksanâtha in the twelfth-century.

Their locations in the yogic body appear to correspond as well to the mystic locations of the mind in its four states as described in a number of late Upanishadic traditions, which declare that while one is in a waking state, the mind dwells in the navel; during dreamless sleep, it dwells in the heart; during dream sleep, it resides in the throat; and when in the "fourth state" only attainable by the yogin, it resides in the head.