China's decision to adjust the yuan has major ramifications for markets much farther afield. Once the soundtrack to a financial meltdown was the yelling of traders on the floor of a financial exchange. Now it is more likely to be the wordless hum of servers in data centres, as algorithms try to match buyers with sellers. But every big sell-off is gripped by the same rampant, visceral fear. The urge to sell overwhelms the advice to stand firm. 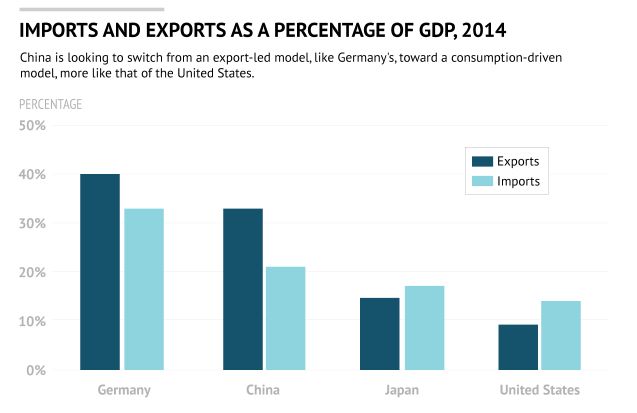 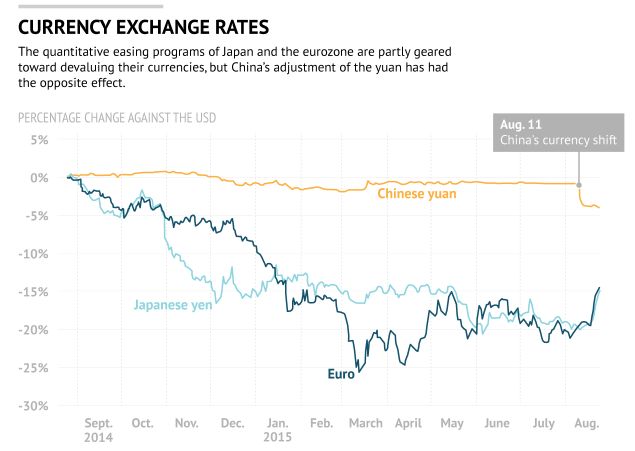 From the rand to the ringgit, emerging-market currencies slumped. Commodity prices fell into territory not seen since 1999. The contagion infected Western markets, too. Germany’s DAX index fell to more than 20% below its peak. American stocks whipsawed. 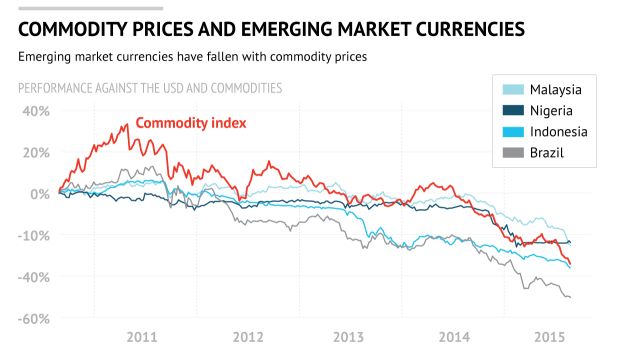 Today, rich-world markets have regained some of their poise. But three fears remain: that China’s economy is in deep trouble; that emerging markets are vulnerable to a full-blown crisis; and that the long rally in rich-world markets is over. Some aspects of these worries are overplayed and others are misplaced. Even so, this week’s panic contains the unnerving message that the malaise in the world economy is real.

China, where share prices continued to plunge, is the source of the contagion. Around $5 trillion has been wiped off global equity markets since the yuan devalued earlier this month. That shift, allied to a string of bad economic numbers and a botched official attempt to halt the slide in Chinese bourses, has fueled fears that the world’s second-largest economy is heading for a hard landing. Exports have been falling. The stock market has lost more than 40% since peaking in June, a bigger drop than the dotcom bust.

Yet the doomsters go too far. The property market is far more important to China’s economy than the equity market is. Property fuels up to a quarter of GDP and its value underpins the banking system; in the past few months prices and transactions have both been healthier. China’s future lies with its shoppers, not its exporters, and services, incomes and consumption are resilient. If the worst happens, the central bank has plenty of room to loosen policy. After a cut in interest rates this week, the one-year rate still stands at 4.6%. The economy is slowing, but even 5% growth this year, the low end of reasonable estimates, would add more to world output than the 14% expansion China posted in 2007.

China is not in crisis. However, its ability to evolve smoothly from a command to a market economy is in question as never before. China’s policymakers used to bask in a reputation for competence that put clay-footed Western bureaucrats to shame. This has suffered in the wake of their botched—and sporadic—efforts to stop shares from sagging. Worse, plans for reform may fall victim to the government’s fear of giving markets free rein. The party wants to make state-owned firms more efficient, but not to expose them to the full blast of competition. It would like to give the yuan more freedom, but frets that a weakening currency will spur capital flight. It thinks local governments should be more disciplined but, motivated by the need for growth, funnels credit their way.

Fears over China are feeding the second worry, that emerging markets could be about to suffer a rerun of the Asian financial crisis of 1997-98. Similarities exist: notably an exodus of capital out of emerging markets because of the prospect of tighter monetary policy in America. But the lessons of the Asian crisis were well learned. Many currencies are no longer tethered but float freely. Most countries in Asia sit on large foreign-exchange reserves and current-account surpluses. Their banking systems rely less on foreign creditors than they did.

If that concern is exaggerated, others are not. A slowing China has dragged down emerging markets, like Brazil, Indonesia and Zambia, that came to depend on shoveling iron ore, coal and copper its way (agricultural exporters are in better shape). From now on, more of the demand that China creates will come from services, and be satisfied at home. The supply glut will weigh on commodity prices for other reasons, too. Oil’s descent, for instance, also reflects the extra output of Saudi Arabia and the resilience of American shale producers. Sliding currencies are adding to the burden on emerging-market firms with local-currency revenues and dollar-denominated debt. More fundamentally, emerging-market growth has been slowing since 2010. Countries from Brazil and Russia have squandered the chance to enact productivity-enhancing reforms and are suffering. So has India, which could yet pay a high price.

The rich world has the least to fear from a Chinese slowdown. American exports to China accounted for less than 1% of GDP last year. But it is hardly immune. Germany, the European Union’s economic engine, exports more to China than any other member state does. Share prices are vulnerable because the biggest firms are global: of the S&P 500’s sales in 2014, 48% were abroad, and the dollar is rising against trading-partner currencies. In addition, the bull market has lasted since 2009 and price-earnings ratios exceed long-run averages. A savage fall in shares would spill into the real economy.

Were that to happen, the last few days have underlined how little room Western policymakers have to stimulate their economies. The Federal Reserve would be wrong to raise rates in September, as it has unwisely led markets to expect. Other central banks have responsibilities, too. Money sloshing out of emerging markets may try to find its way to American consumers, leading to rising household borrowing and dangerous, and familiar, distortions in the economy.

Monetary policy is just the start. The harder task, in the West and beyond, is to raise productivity. Plentiful credit and relentless Chinese expansion kept the world ticking over for years. Now growth depends on governments taking hard decisions on everything from financial reforms to infrastructure spending. That is the harsh lesson from China’s panic.