By Eric Vandenbroeck and co-workers 3 January 2018

Why the Taiwan issue has been so complex

In his opening speech of 2019, and his first ever on the subject of Taiwan, the Chinese president Xi Jinping was characteristically uncompromising. Addressing an audience of military and party officials and his country’s wider public on 2 January, China’s nationalist president-for-life signalled his impatience with the status quo, refused to rule out the use of military force and warned “foreign powers” against intervening in what Beijing regards as a domestic matter.

Although Xi didn’t mention the U.S. by name when he referred to “foreign powers”, Washington is a key supplier of weaponry to the island and is legally bound to respond to threats against Taiwan.

For seven decades, Beijing has sought to absorb Taiwan, where Chiang Kai-shek’s Nationalist government fled after losing the Chinese civil war. It has not renounced the use of force to achieve this goal. Few in Taiwan are in favor of unification with China, which would, in theory, be under a “one country, two systems” arrangement similar to the one in Hong Kong, where the influence of the central government in Beijing is eroding local semi-autonomy.

In a dissertation to be published on 15 January 2019 as “Statebuilding by Imposition” by Reo Matsuzaki writes that; Given that European powers were generally uninterested in establishing the structures of a strong state in their African and Asian colonies, it is unsurprising that most African and Asian postcolonial states turned out to be weak upon independence. However, what explains variation across colonial institution-building efforts in Taiwan and the Philippines, when the goals of Japan and the United States (in terms of institutional development) were so similar? Indeed, it was not just the goal of creating a strong colonial state (and their reliance on “direct rule” to achieve this end) that the respective Japanese and American colonial administrations in Taiwan and the Philippines had in common. The two colonized territories were also characterized by a plethora of similarities in background conditions: both were ethnically heterogeneous and agrarian frontier regions that, outside of a small group of urban elites, had barely been touched by Western modernity. With similar climates, they were both producers of rice and sugar and plagued by the same infectious diseases, such as cholera and malaria. The local populations in Taiwan and the Philippines were similarly hostile toward the colonial occupiers, and as a result of barbarous pacification campaigns by the colonizers, tens of thousands of deaths were recorded in both territories. Yet, despite these similarities, only in Taiwan did colonial reformers succeed in establishing effective governance institutions, which then served as the foundation of a strong postcolonial state.

Due to the fact that Taiwan was a late addition to Japan’s strategic planning, Japan, in fact, was ill prepared for administering an island inhabited by foreign and (unexpectedly) hostile peoples. Indeed, when Prime Minister Itō Hirobumi organized the Taiwan Affairs Bureau (Taiwan Jimukyoku) in June 13, 1895, as the supreme decision-making body in Tokyo concerning the newly annexed territory, Japanese policymakers had not even decided whether Taiwan was to become a special province of the Japanese Empire, like Hokkaido and Okinawa, or would be treated as Japan’s first foreign territorial possession. Of influence was also the possible effects of Japan’s Taiwan policy on the new Commerce and Navigation Treaty that Foreign Minister Mutsu Munemitsu had just concluded with Great Britain in July 1894.

Hence Vice-Foreign Minister Hara Kei Takashi wrote: We have already informed Great Britain that we are viewing the various ports in Taiwan the same way we view the open ports in the Japanese home islands; also, we have told the United States that after pacification [of Taiwan], we will apply our current tax rates to Taiwanese ports; furthermore, we have declared to each of the treaty countries that we will extend the treaty [to Taiwan] as much as possible. Therefore, if we were to adopt the proposal where Taiwan is treated as a colonial territory, we would create a contradiction in our domestic and foreign policy.

Following Japan’s surrender in August 1945, and defeated by Mao Zedong, next Chiang Kai-shek’s Nationalists freed Taiwan from Japanese control with the help of the United States. They also imposed a command economy in which 70 percent of Taiwan’s industrial wealth and 72 percent of its land fell under the control of the provincial administration. This fitted in within Chiang’s scheme to use Taiwan as a supply base for his anti-Communist bastion on the mainland, but it led to massive unemployment, inflation, and near bankruptcy of Taiwan’s middle class. It also resulted in anger against Nationalist monopolies that sparked the February 28 incident of 1947 in which riots and Taiwanese demands for reforms were answered by a crackdown that killed thousands of Taiwanese and mainland Chinese. To the disappointment of some State Department officials like George Kerr, a former vice consul to Taiwan who urged US military and economic intervention in Taiwan in the name of the United Nations, the United States merely urged Chiang to fire the incompetent administrators.

But Chiang himself didn’t immediately see Taiwan as the only territory he could fall back on, there were enclaves in China where the KMT was still in control, notably Hainan Island, an area of Myanmar bordering on Yunnan and many off-shore islands, and these all held out possibilities. During this time when the US remained unconvinced and the KMT itself was divided Taiwan effectively was a client state of the US. In fact, Secretary of State Dean Acheson expected Chiang to lose Taiwan just as he lost China, and American diplomats held secret conversations with Sun; K. C. Wu, a graduate of Princeton and Taiwan’s new provincial governor; and certain Taiwanese elites who advocated that Taiwan become a UN trusteeship and ultimately independent. None of this suggested a definitive policy toward Taiwan, but such contacts certainly annoyed Chiang. By then, though, events outside of Taiwan helped to make the arguably accidental state a reality. The Sino-Soviet Alliance and the Korean War changed how the United States viewed Taiwan in geostrategic terms. The Truman administration put the Seventh Fleet in the Taiwan Strait to neutralize the civil war but then announced that Taiwan’s status should be determined by an international agreement, implying that Taiwan was not Chinese territory in order to claim that American intervention did not constitute interference in Chinese internal affairs. Although he complained in his diary that this lowered Taiwan’s status to a mere piece of an American colony, Chiang accepted the client-patron relationship because it kept him in power. Whereby Chiang would find that the autonomy he had enjoyed in the decision-making process in the mainland era would be long gone in the post-1950 Taiwan era and the KMT’s realization that the game was up in China and the decision by the Americans to finally sign a formal treaty with Taipei.

The pivotal role of the US was most clearly shown in 1996, when China conducted provocative missile tests to try and influence Taiwan’s first direct presidential election. In response, US President Bill Clinton ordered the biggest display of US military power in Asia since the Vietnam War, sending ships to the Taiwan Strait, and a clear message to Beijing.

A controversial trade agreement sparked the "Sunflower Movement" in 2014 where students and activists occupied Taiwan's parliament protesting against what they call China's growing influence over Taiwan. 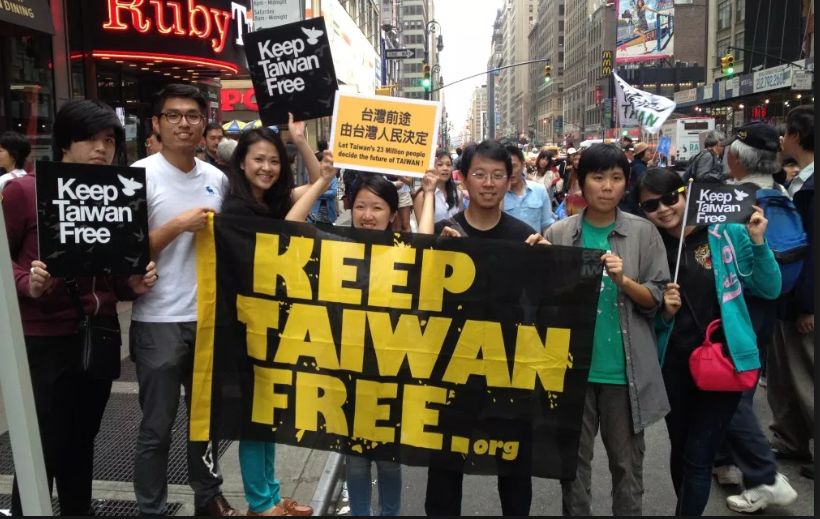 Their activist opposition to a pending free trade agreement with China attracted broad public attention and support, helped prompt a change in government in early 2016.

Officially, the Democratic Progressive Party (DPP) still favors eventual independence for Taiwan, while Chiang Kai-shek’s former KMT favors eventual reunification. Opinion polls show only a small minority of Taiwanese support pursuing one or the other at the moment, with most preferring to stick with the current middle ground.

Rapid advancements in the People’s Liberation Army’s (PLA) military technology and capabilities along with the worsening U.S.-China and cross-Strait relations have made it costlier for the United States to defend Taiwan. Since China perceives Taiwan to be a part of its territory, many in the United States worry that a conflict across the Strait could escalate into a nuclear confrontation when the United States is involved. To prevent such a scenario from happening, some even advocate using Taiwan as a leverage to exchange for compromises with China.

Is China planning to take Taiwan by force?

An article in the South China Morning Post today cites four reasons why China would take Taiwan by force in 2020.

A pro-Chinese position is taken by Sholto Byrnes when he suggests China probably will not attack, and that; "It is understandable that Westerners value its democracy and autonomy and fear that both would be at risk if it entered into a “one country, two systems” arrangement with China. Few, however, try to stand in Beijing’s shoes. Why should it tolerate the independence of a renegade province over which it has an undeniable historic claim, when Spain, for instance, is so fearful of independence efforts that it sends its secessionist politicians to jail? There is a double standard applied to China by critics who don’t like its form of government. But that is for the people of China to decide – and no one can doubt that one day those people will include the 23-million strong population of Taiwan, too."

Since entering office in 2012, Xi has indeed made clear that taking back Taiwan would be the crowning achievement in his vision to restore China’s place as a great power. But as seen above, backed by a U.S. defense agreement, Taiwan has been a de facto independent country since the end of the Chinese civil war in 1949.

Furthermore, while China could attack Taiwan using missile strikes and air strikes in a way that would inflict a lot of damage the question remains if this leads to a breaking point in Taiwan.