An October 2002 poll among cult archeologists revealed the majority today, believe that if Atlantis is not a fictional account by Plato (as historians and archeologists worldwide claim) it should in the Bahama Banks area.

Second in line are those who believe, Atlantis is Antarctica. But the popular assumption during the Renaissance that Atlantis is the current USA (see Nuovo Atlantis by Francis Bacon, John Dee, and others) has come down considerable.

So also recent believes that Atlantis is identical with Africa, various islands of the coast of Africa, Peru, Indonesia, that it is England one of the islands of the English coast, or is somewhere to be found among the rocks on the bottom of the North See.

New candidates turn up almost every day and seem as unlimited as human imagination, fueled by a psychological search for the noble savage/golden age.

Three years ago a popular place for Atlantis was the coast of Japan. This started to change after “Der Spiegel” 23.08.1999 in “Japanische Unterwasser-Pyramide begeistert die Esoteriker” revealed the results of extensive Geological research including a computer diagram of the whole layered rock that left no doubt that it is a natural  formation.

So attention returned back to the Bahama Banks area. A search financed by Fidel Castro two years ago (1) spotted, what most specialists say is a natural rock formation that happens to be triangular shaped.

However what probably gave the Bahamas its modern Atlantis aura is former psychic Edgar Cayce. Most Cayce biographers will deny Cayce read any of the popular books at the time like Phylos the Tibetan: Dweller on Two Planets by Frederik S. Oliver published 1886. Ore Blavatsky’s 1888 The Secret Doctrine (allegedly also inspired by Masters in Tibet), however most agree that Cayce did work in a bookstore.

According to Cayce, Atlanteans had gas balloons, airplanes, submarines, elevators, X-ray devices, “photographing at a distance machines” and yes, television. But what became a modern myth, is Cayce’s claim Atlantis would “rise again - expect it in 1968-‘69” (Reading 958-3,1940).

Looking for this, two members of Edgar Cayce’s organization the Association of Research and Enlightenment, spotted from an airplane a rectangular structure near Andros in the Bahamas. This was 1967, and in 1968 based on this sighting, zoologist Dr. Manson Valentine, who had been exploring the Bahamas for many years in search of lost civilizations examined the Andros and found a building, some 100 by 75 feet, overgrown with seaweed.

In an interview published in 1984, Valentine made it clear that he saw the finds as confirmation of Cayce’s prediction of Atlantis “rising.” The claim has been repeated in literally dozens of books and magazine articles. Meanwhile diving for further traces of Atlantis has continued apace since the first discoveries and there has been an almost continuous stream of incredible claims.

At the same time, many other psychics have picked up where Cayce left off and elaborated his case. After Valentine, the leading proponent of the Bimini-Atlantis link became Dr. David Zink, an English literature professor and accomplished diver whose expeditions regularly included psychics to perform readings on the spot.

His main clairvoyant, Carol Huffstickler, revealed that the Bimini Road was actually part of a labyrinth, built by advanced beings from the Pleiades star cluster -on a kind of galactic missionary service. They constructed the labyrinth at the Bahamas as a sacred site that could utilize the Earth’s magnetic field, “to raise consciousness and heal,” as reported in a book The Stones of Atlantis (1978).

The Bimini Road became the subject of a protracted controversy soon after its discovery. In 1971, a professional geologist pronounced it to be naturally formed limestone “beachrock.” fractured and eroded to give the appearance of large, rounded budding blocks.  Undismayed, Atlantis enthusiasts insisted that the joints between the stones were far too straight to be the result of natural cracking, and that no beach rock formations are known that are as regular or as elegant as the J shape of the “Bimini Road.”

The dispute promised to run for perpetuity until, in 1980, Eugene Shinn of the U.S. Geological Survey published a summary of conclusive evidence he had collected from the stones. If the “Road” had been man-made we would not expect the grains and microstructure within the stones to be consistent from one “block” to another. Yet they proved to be so, in every conceivable test that Shinn applied, showing that they must have been laid by natural means.  Further, radiocarbon tests on shells included in the stones gave dates that show the “Road” was formed between only about two to three thousand years ago-hardly the 10,000 years required by Cayce (or the 28,000 by Huffstickler).

The “Bimini Road” was clearly formed in the shallows of an old coastline only a couple of thousand year, ago. As for the underwater “temple” near Andro, that started the whole thing, Atlantologist David Zink correctly identified it as a sponge storage area built in the 1930s.

Were it not for Cayce’s predictions, it is doubtful that anyone would have associated the Bahama Banks findings with Atlantis in the first place. The shallow waters, of the world’s coastlines abound with curiosities, from geological features to sunken forests and towns. Perhaps the real surprise is that despite all the intensive diving that has been done in the Bahama Banks area over the last thirty years, no evidence at all seems to have turned up of pre-Columbian activity.

To often every anomalous rock becomes a “lost civilization,” and every square stone becomes the Gateway to Atlantis.

Like with the Bimini wall, the Cuban underwater formation will very likely be investigated. Investigating claims is different from “incorporating” claims into the historical record as cult archeologists seem to be to eager to do in what seems sometimes hastily produced books.

Another example that might be looked at in a somewhat different context is the recent claim that Hindus built what would be the longest bridge in the known world, one million seven hundred and fifty thousand years ago. (2) 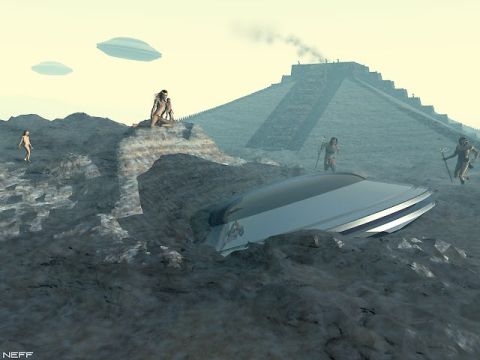